One of the first people to recommend a date for me was an old university friend, ‘The Alleycat’.  We raced together on the Cambridge ski team, and were both in the college drinking and sporting societies … one of which was called the Alleycatz, hence her nickname.

The Alleycat is currently doing a Phd, and had met ‘The One with the Sign’ when he travelled up to Durham to visit his cousin, The Alleycat’s Phd supervisor.  She had gone for drinks with ‘Towts’ (as I’m going to start calling him!), and when she contacted me to say he was keen to help with the challenge, she told me that she’d found him really interesting and thought he would be a fun blind date.

I’m not gonna lie, after Date Number 1, I was a bit apprehensive about my second date.  The challenge was starting to feel like I was forcing myself to go on a string of dates with men I knew I wouldn’t be at all attracted to, and the reality of the next three months seemed to be almost the complete opposite of what I had hoped to achieve.  I didn’t want to spend thirty dates comparing every moment to my dates with Henley Boy and wondering what went wrong.

Knowing the Alleycat’s taste in men, I immediately jumped to conclusions about the fact she had only referred to Towts as interesting, and not attractive.  The Alleycat and I have always had relatively similar taste in men, and I assumed, if she hadn’t hooked up with him when he was visiting Durham (and was happily passing him on to me), that she couldn’t have found him attractive.  Straightaway, I began imagining the worst.  As I planned my date outfit, I opted for flats rather than heels, assuming he would be short.

The great thing about Date Number Two was that it was completely blind.  Unlike Date 1, where I had seen Normal Fish’s profile photo on Plenty of Fish, this time all I knew about Towts was his first name, and the fact that when we arranged to meet up, he had suggested he could make a sign proclaiming he was my Date Number Two, so that I could recognise him! 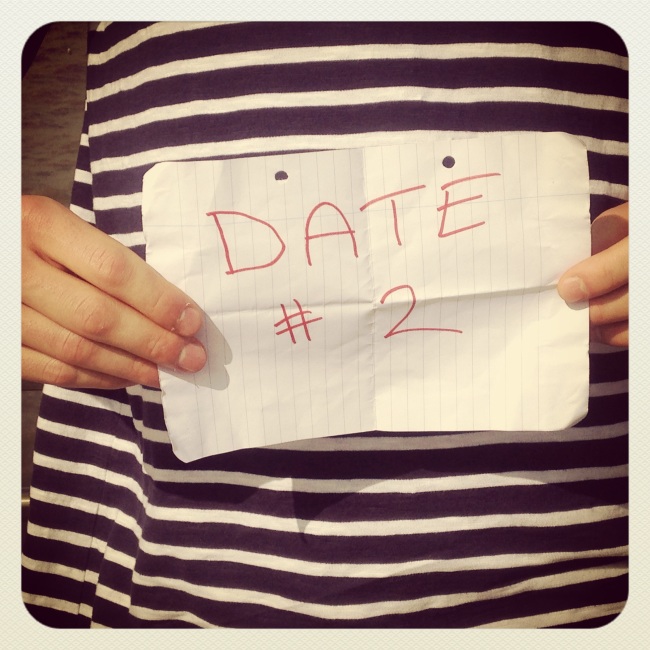 Towts had chosen the London South Bank as our date location, so after some stressful journey planning, and last minute changes, I decided to drive into Central London. (Probably the worst start to a date I could think of!  Almost every time I’ve driven in London before, someone has driven into me!)  I made it to the South Bank with 45 minutes to spare, and the car in one piece.  It was over thirty degrees on the M4, and by the time I emerged from my car, I was rather attractively dripping with sweat from every pore, my hair spun into a beehive from where the convertible roof had been down on the motorway.

Towts had suggested we meet at the second-hand book stalls under the bridge outside the  British Film Institute.  He had agreed to bring his sign, and as I walked towards the BFI, I couldn’t help but grin.  He had chosen one of the busiest sections of the South Bank to walk around with a random sign, and there was no obvious place that he could stand to easily wait for me.

As I moved between the tables of books, I noticed a tall blond man awkwardly holding a piece of paper to his chest.  If I’d thought more about it, I probably should have watched him squirm for a little bit longer, or sent a granny over to pretend to be me, but as soon as I saw the sign, I reacted and went over to introduce myself.

He was neither short, not ugly, so my initial worries were happily unfounded!  The clever idea of the sign was enough of an icebreaker, and we got talking easily.   I had noticed a pop-up food market on my way to the riverside from my car, and it turned out Towts had had a similar idea for lunch, so we got to know eachother as we wove through the food-stalls, browsing the international offerings. 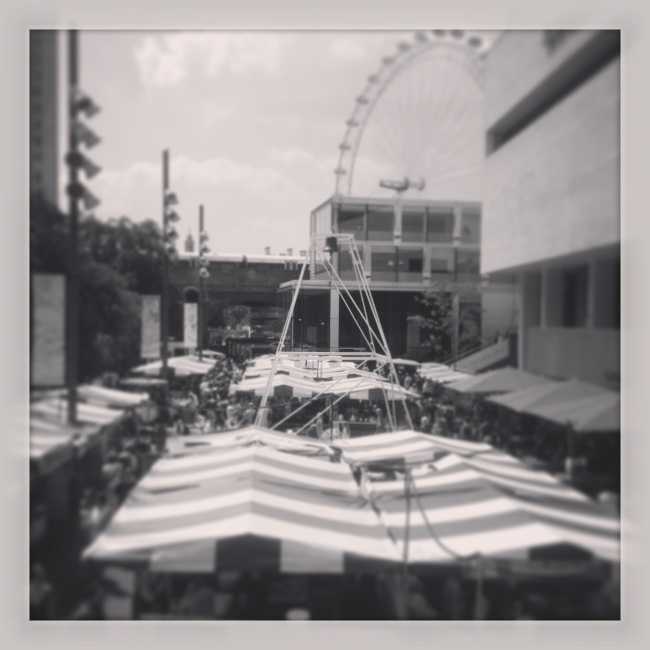 Eventually, after about twenty minutes of indecision, thanks to the enormous amount of options, we settled on dolmers and chicken and pistachio rice balls from a Lebanese (maybe?) stall and goat’s cheese and aubergine tartlets from another stall.  We took the picnic down to a bench by the river and sat chatting in the shade, while London wilted in the thirty degree heat.

Once we’d finished lunch we walked down to the Udderbelly Festival.  This year the giant purple inflatable stage is tucked amongst trees woven with fairy lights and coloured lanterns.

We crossed over to the other side of the Thames, and checked out a fashion photography exhibit at Somerset House, and then wandered through Covent Garden, watching the street performers and talking about an awesome London treasure hunt website which I think I’m going to have to incorporate into one of my later dates.

Finally Towts showed me a Cuban Bar he had discovered whilst on the treasure hunt.  We sat in the reassuring cool of the air conditioning, and chatted about our various travels.

Before we had met, I had joked with Towts that he would be a ‘bar setter’ for the challenge, as he was such an early date.  Ironically, it turned out I was also a bar-setter that day, and if anything, Towts deserves ‘serial dater’ status more than I do, because that evening he had a date at the C4 First Dates restaurant lined up!  He will be on the show next Thursday (though will be on a date in the background of the dates which the show will be focussing on).

After the disappointment of Date One, Date Two was a genuine breath of fresh air, and the perfect reminder of why I’m doing this challenge.  Towts was interesting, funny and well-travelled.  We talked easily, and he had some really interesting and different stories to tell.  It turns out the reason Alleycat considered him a good date candidate is because he’s currently doing his own set of challenges before his 30th birthday (in two years time).

We chatted about the challenge and the blog, and he was a real good sport about it all.  He even agreed to have a (full-length!) picture taken with the Date Sign for the blog! 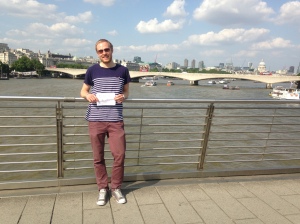 My date with Towts reminded me of what it’s like to backpack.  Spending a day with a random stranger with heaps of interesting stories, and exploring a place at the same time.  The date was spontaneous and fun, and London in a heatwave made it feel like we were in a foreign country.

We met  … in the coolest location suggestion so far!  The used book stalls by the British Film Institute.

I wore … A simple black vest top, ballet pumps, and a green and blue skirt covered in butterflies.

He wore … see the picture above!

We talked about – travelling, uni, his pre-30 challenges, my blog, books, writing, Cuba, favourite travel locations, family, why Date 1 was so awful, my future dates, his C4 First Date that evening …

The date lasted … about three and a half hours, though I was never bored at any point.

The date ended … when my parking ticket ran out!

Marks out of ten?  Hard to pin-point the higher numbers just yet, as I don’t know what’s to come, so I’ll go for a confident eight.  Really fun, different date, definitely one which celebrates the spirit of the 30 Dates challenge.  Towts was really fun and good company, and someone who three hours chatting to was nowhere near scraping the surface of what an interesting person I’m sure he is.  Definitely someone I would go on a second date with, or recommend as a date for a friend.

Well done Alleycat!   More dates like this one please peeps!!

4 Comments on Date Two – The One with the Sign