Well, that nickname got your attention didn’t it!

No, don’t worry, despite the offer from one of my lesbian friends, this challenge hasn’t driven me to ‘lady dating’ just yet! Nor is it a shameless way to try to pull in the readers! 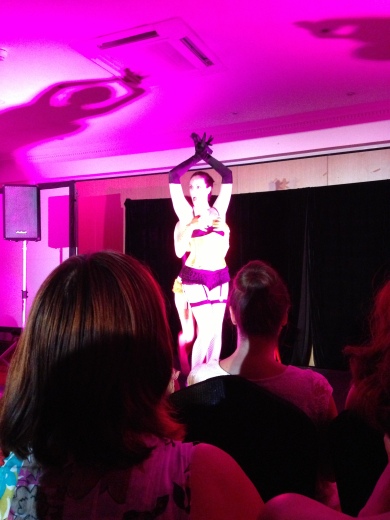 (Though I’m sure the photos won’t drive away my growing male blog following!!)

Determined not to spend thirty dates sitting with the same drink, and the same conversation, in thirty different pubs, I’ve started asking my prospective dates to come up with more exciting date ideas.

The idea which Date Number Three came up with was Burlesque!

I jumped at the idea, but when my Date asked what time I’d like to meet him, I suggested 8.30, to allow me to squeeze in a yoga class before the show. The text I got in response said ‘Always good to be supple before a bit of Burlesque I say‘, to which I replied ‘Just to double check, it’s not a burlesque lesson is it? I think that would actually be the weirdest and most awkward blind date ever!!’

And so ‘The Burlesque Dancer’ earned his nickname … by making me think that the date would involve creepy audience participation!

The Dancer was referred by a friend ‘Canary Yellow’, named so because of the dress she wore at the friend’s wedding where I first met her. Canary Yellow told me nothing about him, other than his first name, and the fact she worked with him. However before the date, I realised that three of my other friends also know him.

I’ll be completely honest …. I peeked.

Seeing my other friends’ reactions to the news I was going on a date with the Dancer, I began to doubt how many of my ‘boxes’ if any, he might tick. Turns out, he didn’t even meet the age bracket criteria I set for this challenge. My dates are meant to be 25-35 … 38 is not in that bracket, Canary Yellow!

I learned a valuable lesson by Facebook Stalking the Dancer.

There is NO point Facebook stalking a Blind Date … you are just setting yourself up for disappointment! Because the great thing about a Blind Date, is for a short space in time, until you actually meet them, they could be anyone. All you have to go on are a few short texts, or emails.

You can conjure your own images of that person. And ok, maybe that might just lead to disappointment … but in the lead up to the date, it allows you to entertain the idea of something exciting. And that excitement is all part of the blind date experience! It makes you dress up nicely, take pride in your appearance, and generally make an effort!

But on this occasion, I definitely sacrificed my own excitement by peeking on Facebook at Date Number Three, because as soon as I looked, I knew instantly that I wouldn’t fancy him.

Yes, that’s massively superficial and judgmental … but why do you think sites like Tinder exist, and Dating Apps have ‘Meet Me’ functions where all you see of someone is a photo, and you check ‘Yes’ or ‘No’. At least 50% of attraction is physical!

But this Challenge isn’t about finding my Mr Right, or even about going on dates with 30 men I fancy. It’s about filling my summer with different experiences, and making the most of my final months as a twenty-something.

And so, knowing I wouldn’t fancy the Dancer, I asked him for ‘different’ date suggestions, and he did well, suggesting either a Comedy Club, or Burlesque. Having never seen Burlesque before, I chose the latter, and, as you already know, over a few awkward texts, his nickname was cemented.

We arranged to meet at the Great Expectations pub in the centre of Reading. Ironic given how low my expectations had been set by my Facebook stalking! 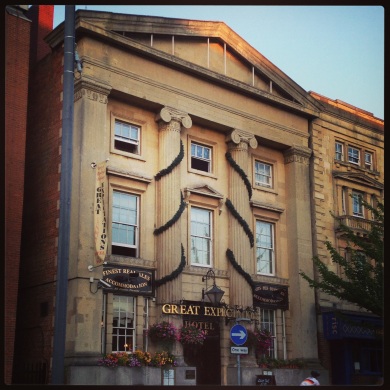 Anyone who followed the date on Twitter @30dates will know that, because I wasn’t particularly excited, it took a lot of persuading to put my make-up back on after the yoga class. And I actually turned up with wet hair, fresh from the gym shower. Any boys reading this, if a girl turns up on a date with either wet hair, or no make-up on, and you haven’t been dating for at least a few months, I hate to say it, but it’s probably a sign that she’s not all that into you!

I found the Dancer easily, though it turned out I wasn’t the only one who’d been Facebook stalking … At one point the Dancer referred to me by surname, something I definitely hadn’t told him!

We started the date with a quick drink. I hovered awkwardly at the bar, wishing we were sitting down, not sure what to do with my handbag, and my attention diverted by the pub quiz going on over the tannoy. I tried to ignore the pub quiz and focus on my date. He was friendly enough, and talkative, though his confidence was the type I would describe as ‘loud geek’ as opposed to charismatic charm. He constantly stood too close to me, so I found myself backing awkwardly away from the bar, and he hit a bit of a raw nerve when he described not overly liking the posh people at Henley Regatta! As he bitched about toffs in blazers, my mind wandered back to Henley Boy, and the photo on his POF profile of him in a comedy Henley Blazer with one of those fake clown flowers that squirt water pinned to his lapel.

Chiding myself, I followed The Dancer (who was the exact same height as me …. looks like flats are becoming the Rule for these blind dates!) out of the pub, and down the road, to a building which teenage Miss29 (Miss17!) had known as the Matrix nightclub. The club closed years ago after gun fights, and when we walked into the venue, we realised it had been converted into an Asian conference centre. The Dancer blew another of my list requirements out the water as he lit up a cigarette en-route.

We ordered another round of drinks, and went to sit down in the main room. The room was decorated as if for an Indian wedding. Paintings of goddesses hung on the walls, and there were ornate icons and decorations.

It all seemed rather odd for a Burlesque venue! Also, the Dancer added that there had only been a few tickets left when he had booked our tickets, and yet the room was almost completely empty. 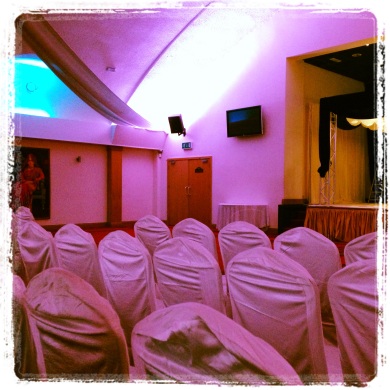 And then, ten minutes after the Burlesque was meant to begin, we realised we were in completely the wrong room!! Whoops!

We moved to a far more intimate and red-lit room, where the wedding-style chairs were decked in more-fitting black covers, and at least half the audience were wearing corsets. The show was yet to begin, and we found seats in the third row.

The Burlesque was part of Reading Fringe Festival, performed by a group called the Scarlet Vixens. The first couple of acts seemed quite amateur. I remember thinking of the expression ‘house-wife burlesque’ as one of the girls pulled awkwardly OTT facial expressions, and tugged at her bra straps.

The dancing was formulaic, and I soon began pre-empting their routines (though in a way that was quite cool, as in the back of my mind I found myself think ‘I could do that …’!) However as the show progressed, the troupe really raised the bar. One girl came out and did a piece where she started dressed in a hoodie and baggy pants, doing break dancing. and then another act was dressed as Buzz Lightyear!

The show was really fun, and genuinely made my night. I had known I wouldn’t fancy my date, and gone into the Date hoping the entertainment would make the evening, and it really did.

I’m not gonna lie, going on a date where you watch other women stripping is a bit of an odd one. I think it’s something you either need to do with someone you really don’t fancy (so you’re not fussed about them oggling the women), or with someone you’re sleeping with (so you can go straight home and try all the moves yourself!). Either that, or make sure you chose a Burlesque show where all the ladies have less attractive bodies than you, so that you’re not intimidated by all the nipple tassels on show!

So for me, it was great, as I didn’t fancy my date, and I could just enjoy the evening. The compere was funny, the audience provided ample people-watching opportunities (the guy in front of me filmed the entire show on his iPad, the guy behind me kept whooping so loudly when bras came off, that we could physically hear his girlfriend repeatedly hitting him!).

As a normal girl, I found myself looking at all the girls of different shapes and sizes, and feeling quite happy in my own skin (even if I can’t spin nipple tassels in opposing directions at the flick of a shoulder!). I guess that’s one of the appeals of Burlesque, it celebrates the female form, so it’s not like you’re sitting there comparing yourself to a fat-free airbrushed model. 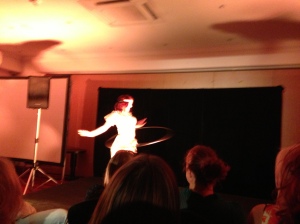 By the end of the show, I was raving to the Dancer about how I wanted the troupe to perform at my 30th Birthday Party (cue him awkwardly trying to invite himself along to it ….)!

Though that wasn’t the most awkward moment of the date …

Firstly, during the Burlesque, when a girl was spinning her nipple tassels in opposite directions, he leaned far too close to me to ask if I could do that!!

And then later, when we were talking about how all the dancers had different shape tassels (we saw hearts, stars, lightning bolts …’) Following on, he decided to ask me ‘So what about your personal collection of nipple tassels and merkins?’

Again, any boys reading this blog, NEVER, I repeat, NEVER say the word ‘Merkin’ on a first date.

In fact, just never say it ever!!! 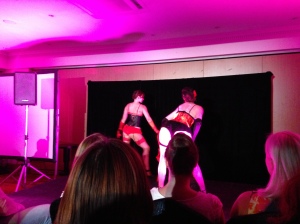 The Burlesque … I would definitely see again.

The ‘Burlesque Dancer’ … not so much!

We met – at the Great Expectations pub. I had less than great expectations, which were lived up to!

He drank Stella. I drank Diet Coke and Rose and Lemonade.

I wore … A simple black vest top, a black skirt with white geometric patterns on it, flipflops

He wore … Dare I admit, I didn’t even notice! Oops!

The date lasted – two and a half hours, including 1.5 hrs of burlesque

The date ended … when the burlesque did, though I did drive him home (see I’m not thaaaaaat mean! I’m just picky, and apparently very brutal!)

Marks out of 10 for the date …. Loved the entertainment, No chemistry at all with my date – 6/10 (saved by The Scarlet Vixens … so I guess that almost constitutes a ‘Lady Date’?! 😉 )

Date Number Four is tomorrow (Friday) with the ‘Model Brother’, can he do any better?!