I probably ought to start by explaining the origins of the Pimpernel nickname. Unfortunately this time I can’t claim creative rights on the name, though it has obviously influenced the blog already after the Fake Pimpernel confusion.

The Original Pimpernel (TOP) went to university with the Newlywed, and is a friend of her husband’s. He earned the nickname on an ex-girlfriend’s blog, and when the Newlywed suggested him to me as a date, rather than telling me his real name, she simply referred to him as the ‘Pimpernel’. Figuring that with a name like that, he must be a pretty entertaining character, I agreed to the date pretty quickly.

When TOP first texted me, he definitely made a lasting first impression! His first ever messages to me included the words ‘chagrin’ and ‘parlance’, and he also used the phrase ‘inter alia’! When he later replied to one of my suggestions with the exclamation ‘Tip Top’, I figured he was eccentrically posh and imagined him appearing to meet me at Belsize Park tube station looking like Toad of Toad Hall! Turns I out I was close … but not in the way I expected!

As per usual I texted to let him know I was running slightly late (nothing to do with making an entrance, and far more related to my hen do hangover and poor time-keeping skills!). He replied to tell me he’d be sitting on a bench to the left of the station entrance and described himself as having ‘slightly reptilian features’.

I thought the description was a little odd, and quite self-depricating (!) but given the flamboyant tone of some of his earlier texts, I didn’t read into the description too much. It was only as I walked out of the station and towards the bench that I realised why he had described himself that way – he was wearing a giant crocodile onesie!

My first reaction was panic.

Unsurprisingly, I wasn’t dressed in an animal onesie (or, regular readers, a polka-dot dress, I’d like you to note … 😉 ) . TOP and I were planning on going to London Zoo that afternoon, and I panicked that after the success of the Zoo Lates events, where adults had attended dressed as wild animals, perhaps this was now the done thing, even during the day! However I didn’t have too much time to worry, as once the giant crocodile had greeted me, he quickly shed his green skin and put it away in his bag, telling me he just wanted to find some easy way of me identifying him as my blind date, without doing the normal clothing description!

The onesie alone told me my preconceptions about TOP being haughty or stuck-up were misguided, and there was certainly no tweed hidden beneath the crocodile costume! Instead, as we walked to the first venue for the date – Ginger & White cafe – TOP turned out to be perfectly normal, and just quite eloquent! 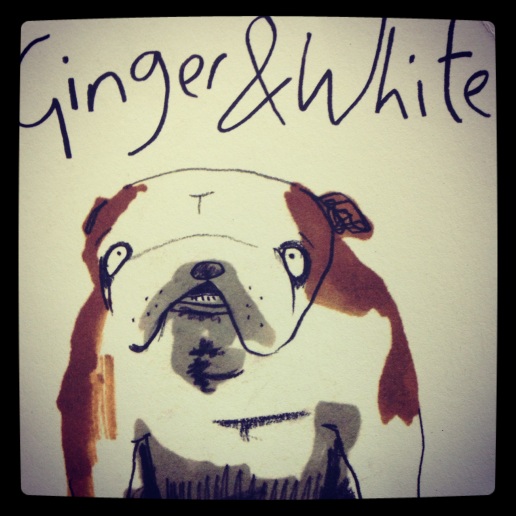 Ginger & White is a chic, fashionable coffee shop, a stone’s throw from Belsize Park tube. We found seats on a sofa in the mezzanine, and considered the coffee shop’s all day brunch menu. I opted for freshly-squeezed orange juice and poached eggs and smoked salmon, and TOP chose the signature banana bread with candied apples and a cream cheese frosting.

We chatted easily about the challenge, and the origins of his Pimpernel name, and then once we’d finished brunch, we walked over Primrose Hill and down into London Zoo. It was a beautiful summer’s afternoon, and when we headed down to the entrance of the Zoo, the queue was at least fifty metres long. However it moved relatively quickly, and we were soon herded inside.

The Zoo is beautiful. A lot of care has gone into the enclosures. The Tiger enclosure is carved from wood, the walkway striped like a tiger’s coat, and the interior decorated with wigwams. The Outback area is divided with huge towering rock formations which reminded me of Pride Rock from the Lion King, and every area is decorated with educational panels, activities, and fun interactive activities for kids. 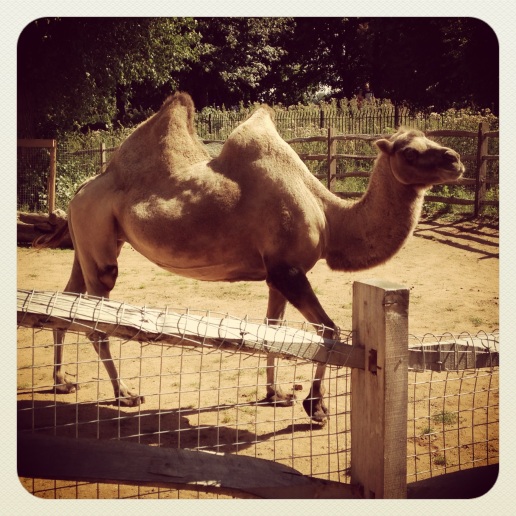 As we wandered around, TOP expertly took charge of the map, and guided us between the animals we had identified as our priorities – the penguins (who weren’t even there!), the meerkats (who had babies!), the camels (who had unbelievably wobbly humps), the giraffes (who were some of the most interesting animals we saw). the monkeys and them the lions, gorillas, kangaroos and tigers – all of whom were extremely dull in the midday heat! 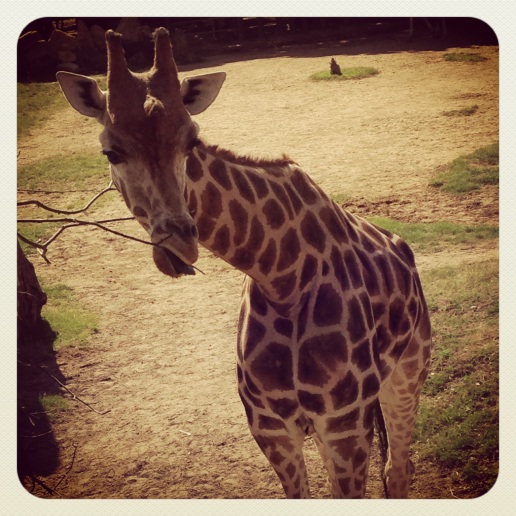 TOP and I both had quite mixed feelings about the Zoo. The organisation obviously do a lot of conservation work, but equally it’s quite sad to see the animals cooped in enclosures and in climates that aren’t their normal habitats. The kangaroos actually looked overheated – ironic given they normally live in a far hotter country!

It was probably one of the best afternoons to see the Zoo. The weather was perfect, and whilst the animals weren’t exactly hyperactive, it was a really nice way to spend the day. However, the sunny weather had attracted the tourists, and we both soon found ourselves getting tired of the crowds. When you’re constantly staring at animal behaviour, it becomes a bit difficult to stare at crowds of random strangers and not start seeing similarities between us and the animals! Especially when they’re not exactly acting on their best behaviour! TOP’s oversized bag (for onesie storage) also proved the source of much amusement, as it was just the same height as the Zoo’s most popular visitor – three and four year-old children. He spent most of the afternoon trying not to hit small children in the face with it!

As the date went on, my blog point-scoring system became another source of banter, as I tried to blackmail TOP into doing crazy things in the zoo, all in the name of claiming another point out of ten for the date. Unfortunately The Original Pimpernel was having none of my suggestions of face painting, swimming with the (absent) penguins, or putting the crocodile onesie back on and climbing into one of the enclosures!

We stayed at the Zoo until the late afternoon, and then TOP led the way down the tow-path for a scenic route past the houseboats of Little Venice. Knowing I was travelling up from Reading, he had planned the date to end in Paddington, however ironically for once I wasn’t actually getting the train home, and actually needed to return to North London, to retrieve my car, which had been parked up at my friend’s house since my date on Friday with The Enigma.

I wore … a turquoise shirt with pink and blue birds on, and cropped navy trousers.

He wore – a dress shirt and chinos (and momentarily, a crocodile onesie!)

The date lasted – six and a half hours

The date ended – as we reached Paddington Station, after a fair old walk in the sunshine

Marks out of ten? I would say 8/10. The zoo was my idea, and if I’m honest I think Zoo Lates might be more fun to go to as an adult without children. We had a fun day, and TOP did observe at one point how much easier it is for someone who is quite shy to talk more easily when you’re walking around together as opposed to being face to face. The coffee shop TOP chose for brunch was lovely, and I had a really comfortable, interesting afternoon.

Next date? Thursday night with the ‘Stand-In’