So this definitely wasn’t the post I expected to be writing tonight!!

Yesterday the blog hit 35,000 views, and as a mark of celebration, I decided to do something I had been planning on doing for some time.  If I’m completely honest, even I don’t really know what I was hoping to achieve … a final bit of closure maybe?  A metaphorical two fingers up at a guy who had messed me around, without even the dignity to make it clear he was messing me around?  Or maybe just a chance to have a bit of a gloat.  Because frankly, I’ve had a really rather cool summer, and none of this would have ever happened if it weren’t for Henley Boy.

Whatever my motives … yesterday evening, on my mad dash into London for the Vinopolis Dating Event, I posted the following card to Henley Boy – 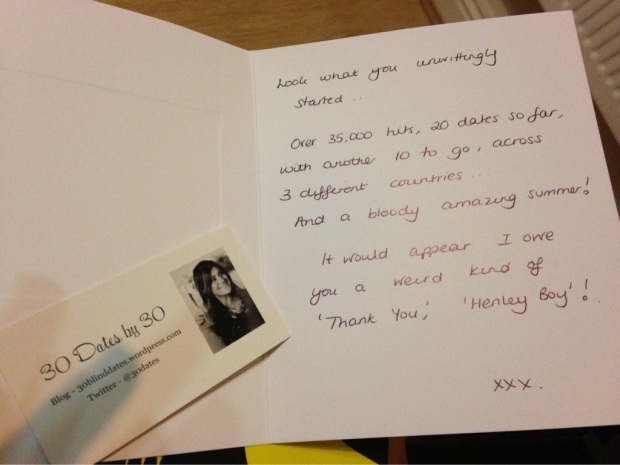 The funny bit is that I genuinely never expected him to reply.  The guy had openly led me on for two weeks, chatting to me every night, texting all day, and then gone complete and utter cold turkey – not even a brush off text message.  So why would he ever reply?  In fact I doubt he’d even remember my name, let alone have kept my phone number.

That’s not to say the writer in me didn’t want a ‘Return of the Henley Boy’.  Two months in, and I can genuinely say the challenge has given me some of the things I was looking for – and one of those is a chance to get over Henley Boy.  It’s an awkward one, because I know how trivial just two or three weeks getting to know someone can sound, but in that short space of time,  he had a surprisingly big effect on me – I couldn’t remember hitting it off so quickly or easily with someone before.  I’m not proud at how easily I fell for him, but I trusted him, and I think that was always the hardest part about it.  His brush off came out of nowhere, and was so unequivocal, because he never ever replied.  He never ever brushed me off.  He just went completely silent and let me get the message myself.

There have definitely been times in this blog when I’ve wondered about merging fiction with reality.  Like when things were going well with The Enigma – I found myself wondering if I could go on more dates with him, but fictionalise them to make them seem like they were just normal first blind dates.  In fact The Enigma even joked about pretending to be different first dates for me, including a guy called ‘Bernard’ who he did a rather amusing impression of on our second date.

I toyed with the idea of reintroducing The Henley Boy – because if this were a Hollywood movie, I’d have fallen for The Enigma – the bumbling Colin Firth type who I didn’t fancy at first instance –  only for The Henley Boy (played by Bradley Cooper or someone suave and sophisticated like that) to return, just after my 10/10 date with The Enigma, complete with a story of being hit by a bus, or a family death abroad, or some other completely excusable reason for never talking to me again!  And then I’d have been forced to decide between the two of them, dividing readers and setting up Team Enigma and Team HB camps!

But real life doesn’t happen like that.  And the reality of the matter, is that one of the things this challenge is teaching me, is that maybe I am a bit naive  when it comes to relationships.  I wear my heart on my sleeve, and always have done.  If I like someone, I don’t play games.  I act like I like them, and assume that if they like me back, they’ll be happy that I also like them! I’m brutally honest – normally to my own detriment.  There is no mystique about me.  I’m a nice girl who wants to be in a relationship.  I don’t do one-night stands or shagging about.  I like being someone’s girlfriend, and treating them nicely, and if I meet someone I like in that way, I’m pretty honest about it.  But adult life isn’t always as easy as that.  And as I realised with the Enigma, you can easily pick up on the parts that you want to hear in what someone else says, and brush over the other bits that don’t necessarily fit in with what you’re hoping for.

Anyway (according to the daily countdown on the blog!) I’m getting older.  And if this challenge is doing anything, it’s definitely making me a bit wiser about the opposite sex!  Or so I would like to think??

And perhaps the first proper indication that this challenge had (rather sadly) helped me get over Henley Boy, was what happened on Saturday night.  I was at one of my best and oldest friend’s weddings.  I was feeling great – I had a pretty dress, and my hair was all cool and styled, and I was feeling really happy about life.  (Insert obligatory self-taken photograph of single old me!!)

I was the only single person at the wedding (something I’ll discuss in a future post!), and so when it came to drunk o’clock (very early in the evening as the free champagne had been flowing from 12 and all I’d had for breakfast was a cereal bar), rather than snogging a randomer, I took to drunk dialling.  Or rather drunk texting.   And who was it I drunk texted?  The Enigma 😦 (He unsurprisingly didn’t reply!  I hope my text properly conveyed just how smashed I was at the time!)

But the point is … two months ago if I’d ever got that drunk, HB would have been the first person I would have thought about .. so at least that’s some improvement? Hey?!

What I hadn’t realised when I posted Henley Boy’s card yesterday, is quite how efficient the Royal Mail can be …. It arrived this evening.  And shortly afterwards, I received the following text from HB – 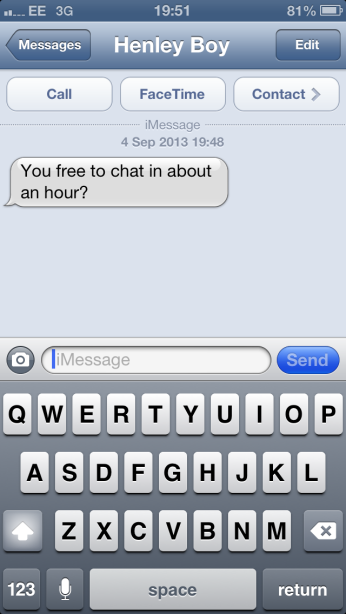 I nearly had a heart attack at my desk at work!  I actually did a double-take at my phone –

2) And I’d forgotten I’d changed his name on my phone to Henley Boy!

I sat with hands shaking, wondering what to text back.  It was hard to understand the tone of the text – it was obviously quite brief.  What could he want to speak to me about?  Had he read the blog?  Was he angry?  Was he ready to tell me why he hasn’t spoken to me for over two months?

I texted back explaining I was at work and wouldn’t be home until midnight.

He replied, curtly again, but saying that would be fine and he’d call me later.

By now I was panicking.  What was I putting myself in for speaking to him?  I’d finally got myself to a position where I was comfortably over him.  He had played his role in my life, and that was to launch what has become a once in a lifetime challenge, and an unrepeatable summer.  Surely that was enough.  And I’d come to terms with that.  Henley Boy had been my catalyst.  So much so, that I now thought of him as ‘Henley Boy’, and not by his real name, or as the funny, approachable, gorgeous guy who I met in the middle of the street in Marlow!

I sent a tentative text telling him I was happy to talk, as long as he wasn’t going to yell at me, and making a joke of the fact there is talk of this blog being made into a film.  ‘If you’re mean to me, I’ll make sure they cast someone really ugly as you!‘ I joked.

His reply was curt and to the point.  ‘I won’t shout‘.

And with that, I tried to continue on with the rest of my shift at work, my hands shaking with adrenaline-fuelled nerves.  I posted comments on Twitter and Facebook, and soon both were blowing up – with friends all around the world (and people I didn’t even realise knew who Henley Boy was) commenting on my Facebook status ‘OMG I just got a text from Henley Boy’!  Interestingly, three of the people commenting about it were my former blind dates! – The Fake Pimpernel, The Original Pimpernel and The Fresh Prince (all of whom I’d told about HB during our dates, when discussing why I’d started the challenge)

My work colleagues were all looking at me in confusion as my phone vibrated away, as message after message, and ‘like’ after ‘like’, came through on the social media.

It seemed I wasn’t the only one excitedly yet nervously wondering what was going to happen at midnight!  Many of my friends insisted on texts when I came off the phone with him, others said they’d stay up waiting for this blog post, and my adoptive Mum warned me not to call him because he’d upset me so much last time!

Somehow I got to the end of my shift, and managed to drive myself home without crashing the car.

On my way home, I found myself wondering what he had to say.  After HB went silent I had sent him a couple ( I promise it was literally 2!) of messages asking what was going on, including a really lengthy, (apparently far too nice) heartfelt Facebook message, very honestly asking what had gone on, and explaining that I’d spent the past two weeks wondering what I had done so wrong.  He hadn’t so much as texted in response to those messages.  So what was he going to say that needed him to give me an hour’s notice of the phone call, and couldn’t be sent in a message?  It was definitely out of keeping with the way things ended between us.

I got changed into my pyjamas, tucked myself up in bed, and took my phone off silent.

And then I waited …

I had decided I wasn’t going to call him.  And, despite a hilarious suggestion from one of my best friend, resisted the urge to try to record the phone call!

I sat and waited, still unsure this was all really happening … because over the past two months Henley Boy had almost become a fictional character to me!

And then he texted …

I went to get a glass of water, began writing this blog post, and a few minutes later my phone rang.

10 Comments on The Return of the Henley Boy – Part One!