She’s back!  I’m not gonna lie, The Rebound Gal has probably my favourite blog name.  Every time I set up one of her posts, I see her emerging through swinging Saloon Doors … heading back out into the Wild West of dating, her hair in no-nonsence pigtails! (something particularly ironic this evening as she has just sent me a photo of her hair to include in the blog!)

Reading her tales have inspired me to write about my own recent Rebound experiences, which I will do shortly … but first, it’s time for Rebound to take a leap of faith!

So, on Sunday I went on my first actual post-relationship date.

As I’ve said before, the thought of going on an actual date scares the living daylights out of me!

In real life I’m a confident, happy-go-lucky type, not too worried about what’s happening, who I’m with etc.

But yesterday, well, that was a whole different story.

I did have a date organised over Tinder, but unfortunately (or fortunately, depending how you look at it) he had to go away for work last minute and cancelled.

That meant that I was free last Saturday night and went off to a forties-themed party called The Blitz Party.

If you ever fancy going back to the 1940’s then I would highly recommend The Blitz Party! There was live music and for the ladies, complementary hair styling! 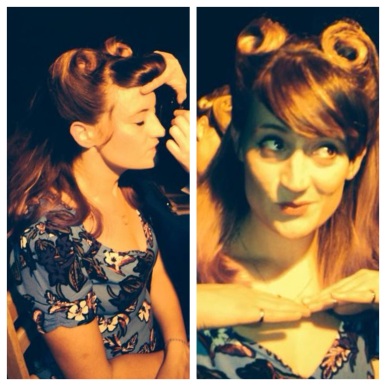 There were also dance lessons from a group called Swing Patrol and this is where I met the Swing Dancer!

We kept having to switch partners, and on one switch I ended up with him. I didn’t switch again for the rest of the 10 minute lesson! When we finished, he offered to buy me a drink. We found somewhere to sit and started chatting! I only realised the time when I looked round and saw people queuing to collect their coats. It was 2am, we’d been talking for close to two hours!

When the Swing Dancer asked for my number, I didn’t hesitate.

This is the first time in a long time that I have felt that comfortable with someone so quickly and easily.

We texted that night, I told him I’d got home safe and discussed late night food.

Next day we chatted on the phone for another forty-five minutes. The conversation was so easy! We organised to meet on Sunday and that he was going to plan things and send me instructions nearer the time.

By going on a date, I was basically drawing a line under all that has happened with my ex, and admitting to moving on.  And that really scared me.

Even though I know deep down there’s no going back, and the relationship is over, I still have occasional, stomach-flipping moments where I imagine rekindling things.  And this started happening very frequently towards the end of last week.

On Saturday, I received my instructions:

Hello, how is your day going? It’s time for tomorrow’s instructions…can you meet me 2pm at Spitalfields Market. Call or text when you arrive and we’ll find each other amongst the stalls. Also you may want to bring or wear some flat (or at least comfortable) shoes – part of the afternoon may involve a bit of moving about! xx

What were we going to be doing? Right, now I need to plan my outfit!!

Sunday morning came and, unsurprisingly, I was a bag of nerves. With all my worrying, I got up and started getting ready four hours too early! I was ready to go by 11.30!

I arrived at Spitalfields after a few words of encouragement from my fellow Experimental Daters over Twitter feeling a little less nervous but still not great.  I knew this wasn’t going to be easy. We found each other easily and then had a wander around the market as we waited for the mystery activity.

I could have told him then and there that I wasn’t ready to date but I wanted to see if I changed my mind.

The main part of the date was actually brilliant. We met dancing, so he had found a swing dance lesson run by the same company. As it was a 45-minute long focused class, I really did learn to dance! I can now do a basic eight-beat Lindy Hop routine!

After the lesson, we went over the road to a bar and had a drink.

This is when my nerves let me down.

I was awful, I couldn’t even look him in the eye! I knew I had to say something, but I felt so much like I was letting him down. He knew about the old relationship, I’d mentioned it the previous week, so he wasn’t surprised when I told him how I was feeling.

In fact he was more understanding and kind about it all than I could have expected.  He thanked me for being so honest and not just running off, although, I would never have done that.   I’m not the kind of person to not at least try to explain –  I care too much!!

After my confession that I wasn’t really ready to be out on the dating scene I relaxed considerably! I looked at it as friends hanging out and  felt much happier.

We had dinner, which I paid for (he’d paid for everything else so far) and talked about all sorts. It was probably one of the best ‘dates’ I’ve ever been on!

I really did have a great day, but in doing so realised that my broken heart isn’t quite fixed yet.

A bit more time and maybe I’ll be able to go on a date without freaking out halfway through!

Emotions play a huge part in dating, obviously, but some only show themselves when you actually put yourself out there. I know that I want to move on but I know now that it’s not going to be soon.

Here’s to the day when my emotions calm and I can go on a date knowing that I’m ready.