Not my title, I must admit, as I recently dubbed The Rock Chick’s post ‘I Kissed a Boy …’ , however for continuity sake I thought it best to head this up with the same name it has on the Threads blog. 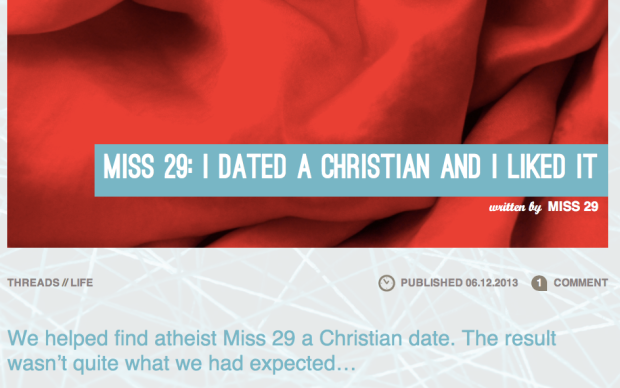 You can check out the Threads version of the blog post here … but I thought you guys might be interested in why I decided to write for Threads again.

Back in August the Christian blog site Threads asked me if I’d consider dating a Christian as part of my thirty dates.  I wrote a post for their blog, explaining my beliefs (or lack of) and why I’d never considered dating someone religious before.  In return, they advertised for a ‘date with a Christian’ for me. The post provoked some interesting responses – from accusations that as a non-believer I ought not attempt to steal eligible Christian guys, to an article by Threads’ own ‘Boy About Town’ going into great detail about why he would never consider dating me!

Those of you who followed the 30 Dates by 30 will know that I did in fact date two devout Christian men as part of the Challenge.  The Best Man – a blog reader who asked me out over Twitter and simply happened to also be Christian, and The Voice– the eventual ‘winner’ of the Threads search.

My date with The Voice didn’t end up raising any particular religious debate.  And it was interesting to find that the main reasons I had never dated a religious guy before (beliefs relating to pre-marital sex and cohabitation) weren’t even issues where The Voice was concerned.

However there was one key aspect of my date with The Voice which definitely affected things.  Something which underpinned the success of every single one of my 30 Dates.

I didn’t fancy him.

When I originally asked Threads if I could write another post for their blog, I had planned to focus on The Experiments.

Spurred on by the support for my 30 Dates Challenge, and not wanting to end the blog once I successfully completed Date Number 30 in Los Angeles at the end of September, I launched Phase Two.

Inspired by the original Threads idea that I should push the boundaries of dating and explore the importance of shared faith in the world of Dating, I’ve obviously expanded the 30 Dates blog to explore all aspects of dating in the form of ‘The Experiments’, 30 topics spanning everything from Faith to Sexuality to Fear.

I explained how I’m no longer writing alone, and introduced The Experimental Daters, and my reasons for recruiting them – pointing out that I had originally wanted to thank the editors of Threads for inadvertently prompting the Dating Experiment idea.

However a very recent development in my single life, which I thought might be of interest to Threads readers, changed the nature of my blog post …

The other day I went on a date.  With a devout Christian.  Who I really rather fancied.

If you remember back, my original reasons for never considering dating someone religious were practical.  I’m a big believer in sexual compatibility (amongst all the other forms of compatibility), and I have firm beliefs that you need to live with a partner before marrying them, because people are completely different when you see them twenty-four hours a day.

And up until this point, I’d been able to remain behind my atheist picket fence, staring out at guys I fancied, who had such dramatically different beliefs on relationships, that I knew we could never be a match.  Or meeting Christian guys with more liberal views, who I didn’t actually fancy.

I’d never met a Christian man with liberal views on the practicalities of a relationship, who I actually fancied.  And so I guess I’d never had to delve too deeply into how strictly my own (lack of) beliefs affects my dating ideals.

And then I went on a date with a friend of a friend.  I’d fancied him from afar, and only realised he was religious when we were arranging our first date, and he let me know he needed to be finished in time for Church.

If I’m honest, going in to the date, whilst I expected a physical attraction, I never expected an emotional one, because I automatically assumed we’d have such polarised views on things.  And yet the more we got to know each other, the more I realised we shared very similar moral codes.

For him, pre-marital sex and cohabitation weren’t things he saw linked to his religion.  And by contrast, the Christian attributes he did represent, were things which appear in my own moral code, regardless of my religious beliefs.

He had studied Theology at University, and was happy and open to debate religion, and certain aspects of religion which he felt had been misinterpreted over the years.  And at very few times during conversation did I ever find myself disagreeing with anything he said.

It’s interesting, because I’m sure it’s the conversation the Threads editors had hoped I would have with The Voice when we were first set up together.  But the nature of our date – an awkward brunch, on a hung-over Saturday morning – didn’t lend itself to open, natural debate, in the way my date with this other guy did, happily strolling around Hyde Park’s Winter Wonderland.

And perhaps I was more open to having the conversation, because I’d acknowledged that I did in fact rather fancy him, and was intrigued to see how much we had in common, despite the nominal Elephant in the room.  Or rather the absence of something rather massive in my own personal space – I don’t believe in God.

Up until this point, I’d always pretty decisively determined I couldn’t date someone religious.

It’s something The Voice was extremely agitated by.  Not just me – but most non-religious girls.  He had used OKCupid as an example, and explained that very few girls seemed keen to date outside their religious beliefs … or lack of.

But I suppose those girls, like me, had always seen religion as a black and white decision.

The ‘God’ question stretched out over a several other life issues.  So that saying ‘yes’ to His existence didn’t just mean belief in a higher power, but also subscription to a pre-ordained set of life rules.

And yet, I realise to some degree religion is pick and mix.

Before I create uproar, I promise I don’t say that trivially.

What I mean, is that – for example – both The Best Man and The Voice would describe themselves as active, devout Christian young men.  And yet The Best Man didn’t believe in sex before marriage, whilst The Voice freely admitted to not being a virgin.

Religion is about personal interpretation.

And that interpretation is truly personal.

So where does that leave me, when faced with a guy who seems to embody most of the things I would look for in a man? A shared moral code, and basic belief system. But one underpinned by a very different stance on life as we know it.

Interestingly, I have a feeling it would matter more for him than me.  Because where I saw a shared moral code, he saw the absence of a fundamental belief.  And if you’ve devoted your life to something, I would imagine it’s very hard to commit to someone who doesn’t believe the object of your devotion even exists.

But who am I to guess?

The reality of it all … like the reality of any form of dating … is that you never know what the other person is thinking – at least not in the early stages.

So I will leave it by simply saying, I had a really good date with a Christian.  One so good, that it genuinely made me consider my attitude to dating someone religious.  Yes, he would have to be a particular type of Christian.  But maybe I learned the lesson Threads were hoping to teach me after all … just a couple of months too late!