Tonight did not end how I expected it to!

It ended with a blind encounter.  And one which is the source of great dilemma as a single girl.

I live alone, and have done so for over a year now, so I’m not quite sure how the dilemma passed me by so easily before.  But this Christmas there was no avoiding the situation.  For the past two weeks I’ve been involved in a heated debate with my team at work.

I’m a single girl, living alone.  I spend a maximum of two hours awake in my flat most evenings, and plan on spending the majority of the Christmas break with friends and family.

So in my eyes, there was no need for me to get a Christmas tree … but others had different ideas!

My team have spent the past couple of weeks trying to convince me that a Christmas tree is a necessity in any home, regardless of the number of occupants.

And as a result, my night didn’t go to plan!

I’d finished work later than planned, and realising my kitchen was barren, opted for the easy option of conveyor-belt sushi … my current addiction (see my the First Date of Christmas!).  After a rather awkward dinner (the waiter not only recognised me but brought over my drink without even asking!  I’m guessing not too many people regularly go there alone!) I took a cursory look around House of Fraser before heading back to my car.  Only to discover they had a 70% discount on their rather decadent Christmas tree decorations!

I’m a bit of a magpie when it comes to all things sparkly! (that may include men …)

Ten minutes staring at all the gorgeous crowns, ballerinas, Cinderella mirrors and glittering musical notes and I was sold.  Two weeks of denial went out the window.

I was no longer going to be a single Christmas grinch.

I invested £30 in decorations (which having checked the receipt, would have cost over £100!!! This is why I’ve never had a tree before!) and left the shop wondering what I was going to hang them all on!

Next stop, a 24-hour Tesco, where I bought one of their last two remaining Christmas trees.  Except there was a catch.  Norman the Nordman Spruce was all wrapped up, so I had no idea what he looked like.  The closest I’ve come to a blind date this week! 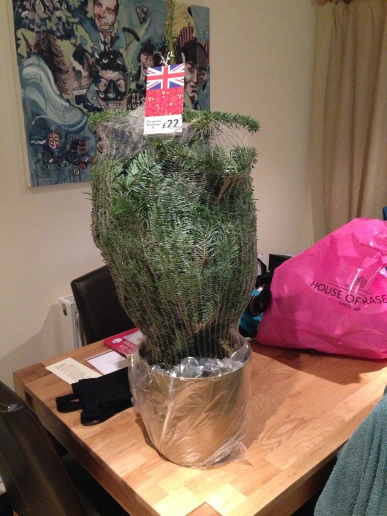 There had been no real pre-planning, so rather than seamlessly removing him from the store in a trolley, I manhandled Norman out the store – not realising how heavy even a small potted Christmas tree is I nearly dropped him twice!

Obviously I’d completely forgotten that as a Single Girl, I also own a completely impractical single girl’s car!  Turns out, not only is it very tricky fitting any guy over 6 foot in my teeny tiny two-seater sports car, but it’s also near impossible to cram in a 3 ft Nordman Spruce!

With the same amount of elegance I display on most of my dates, I crammed Norman in the car, and man-handled him home and into my living room, for the big unveiling.

And so I caved.

I may be single.  I may be living alone.  But I am now the proud owner of my first ever Christmas tree, and far too many over-sized sparkly, girly decorations!

Sometimes blind encounters work out for the best …  Norman turned out to be a substantial grower!  And he has found pride of place beside my TV.

After thirteen days moaning that Christmas trees had become the new ‘children’s photos’ of Facebook (you ‘aah’  at the first couple, then just get a bit bored), I’ve joined the masses and crossed over to the sparkly side. 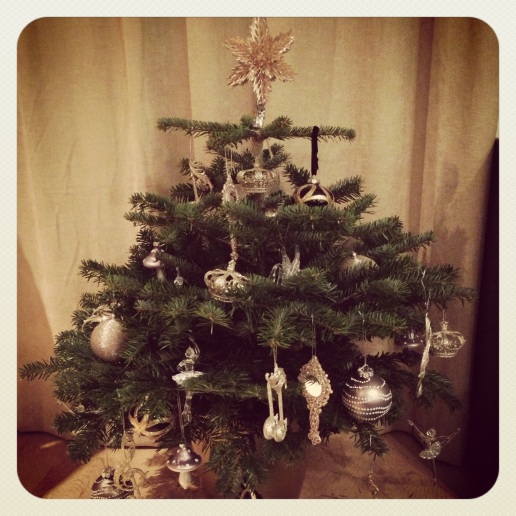 Knowing how much I enjoy a personal challenge …. now I have to make sure at least one (actual real!) single man gets to see the tree in all its glory before the end of the official Christmas period …

And no ‘tree’ is NOT a euphemism!!

How am I ever going to lure someone back now that I’m a Celebrity has finished airing?? 😉