Following on from Rebound Gal’s write-up of their date, it’s time to hear about Drink Feast from TOWTS’ perspective!

Turning up half an hour late and out of breath usually isn’t the best way to start to a date, particularly when you know the date is being reviewed! But then again, going to an old warehouse patrolled by a Matador to sample various cocktails isn’t really a usual date.

Having read Dapper Gent and Blonde Ambition’s dual reviews of their epic date a few weeks ago, I thought it would be interesting to take part in something similar with another experimental dater. So when Miss29 got in touch to ask if fancied going on a date and reviewing it, I gladly said yes.

After all, what’s the worst that can happen?

It was only after I’d accepted that I realised I had no idea who Miss29 had paired me with. So it was a pleasant surprise when – after a few text messages – I finally put two and two together and realised Rebound Gal would be my date for the evening. We’d met before and had got on well so I was confident we’d have a good time together. 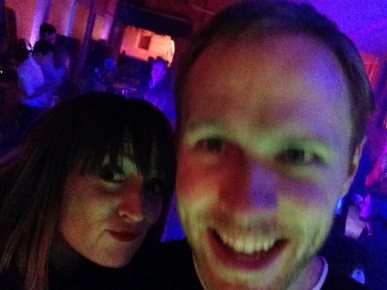 Having apologised profusely for turning up so late, I followed Rebound Gal as she confidently used her mobile to lead the way to Drinkfeast at Hoxton Docks. Despite reading the event website, neither of us really had any idea what to expect, so it was a relief not only to find the entrance to the venue, but to find that our tickets were in fact valid.

We bought some drink tokens – think poker chips – and made our way into what can best be described as a farmyard strewn with ship containers crossed with a jazz concert venue. With the occasional grizzly bear and beached fishing boat thrown in for good measure.

It took us a while to get our bearings in the middle of so many different cocktail bars in one place. Having explored the venue we settled on a hot cocktail to get us started and were both offered the biggest free shot of vodka you’ve ever seen while we waited for our cocktails.

Settling down on a bale of hay, we fell into easy conversation while listening to the jazz band playing nearby and drank our way through the first round of cocktails of the evening.

Each different “bar” had a theme for the evening, be it a region or a particular spirit. Cuba seemed as good a place as any to venture to next. Having been given instructions on what not to order while Rebound Gal guarded our bale of hay, I settled on two “Hurricanes”. It turns out a Hurricane is not as manly as you think it might be!

Sipping on our two Hurricanes, Rebound Gal mentioned she’d seen someone famous, and proceeded to try and surreptitiously take a picture of said famous person. Apparently her pretend texting wasn’t quite up to scratch though, because we were soon being danced at by Made in Chelsea’s Proudlock who then came over and offered to be in a “proper picture”. It was all slightly surreal.

Our last cocktail of the evening was the enticingly named “Christmas in a Cup”, which consisted of every spirit even remotely linked to Christmas, with an orange slice thrown in to count towards your five-a-day. We both weren’t really meant to drink that day, but going to a cocktail festival and not drinking just seemed silly.

I think we both would happily have stayed longer, but Reboundgal had a birthday party to attend, so we made our way there and had a few more drinks with some of her friends before calling it a night.

All in all, I had a really fun night with someone interesting and witty who doesn’t take herself too seriously. Things would be much simpler if all dates were this easy and relaxed.