You’ve read Fader’s angle on her blind Experimental Date with Mister Mischief on Friday night … Now it’s time to hear about their date at the Bavarian Beerhouse from Mister Mischief’s perspective! (I’ll give you a clue … I think someone has a rather large crush!)

I was quite looking forward to the night but was also afraid since I wanted to make a good impression.

I had tried to pry out of Miss Twenty-Nine who my ED date was to no avail and so had given in to the concept of a proper blind date. 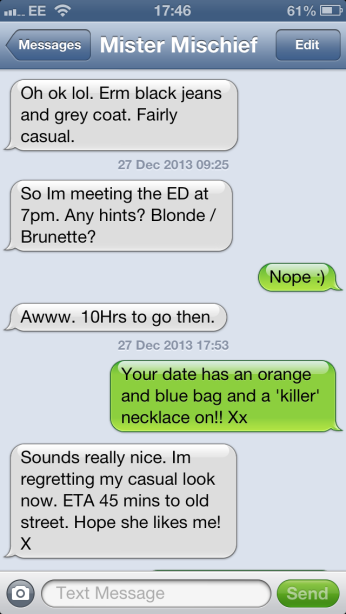 Getting into London is a bit of a commute for me so I left the house earlier than necessary in order to arrive without having to break into a fast walking pace at any point in the journey. I don’t think I have OCD, it’s just that walking fast makes me hot and bothered which would not be conducive to a happy Mischief for a blind date.

Arriving with plenty of time for slow walking seemed the logical choice.

Arrived at Old Street, found the Beer House (Exit 8, past Eye Hospital) and sat on a wall outside.

Got a text informing me my Experimental Date would be toting an orange and blue bag and a stylish necklace.

The street was not busy at all so as a figure appeared from my left my eyes immediately scoured her person for the colour orange and then scanned further up past the mountain ranges for a necklace.

After the quick visual pat down “Bingo!”, sort of. I didn’t recognise her but the accessories were correct

Fader introduces herself and we wander down into the Beer House.

“Table for two” we ask, “That one in the corner is free” said the bar maiden and led us to our spot for the night.

We immediately get to the chatter after ordering a fruit-based drink (wine) for the lady and a pint of sweet wheat beer for myself. A food platter to share is also ordered, because sharing is caring.

Fader is attractive, funny and easy to talk to which relaxes me.

We talk about all sorts – music, languages (Deutsch), work, university, fun drinking games etc. She tells me some funny stories about her work  One or two of these stories makes me very envious of a young lad who shall be called “the player” to protect his innocence.

As the night goes on the friendly bar maiden who served us is shuttling steiners to a very rowdy bunch in polo necks and blazers. We hail her down and she glides over to take our order – Jaegerbombs!! When in doubt if one has already answered the call to beer and sausages the next logical step is Jaegerbombs!

The 56 herb and various fruits concoction named after a master of the hunt, which we both agree tastes like very nice medicine, is consumed, the bill is paid and then we make off for our next port of call. A nearby pub that Fader knows of, which dispenses cocktails. Huzzah!

We settle down with a drink made mostly from Kraken Rum & ginger beer and begin the chatter again.

We talk of the 30 Dates phenomenon, friends and ideal partners.

Then after consuming a brand of Gin called Chase (48% proof) we even touch on existentialism and a mutual fondness / respect for science.

The night draws to a close (last orders) and we get our final drinks, finish them off and then exit the nice pub.

“If only I were younger I would suggest going to that club and throwing some shapes” I say, as we walk past some thumping electro music coming from a basement club.

What I meant in my head was “I want to go dance with you until the break of dawn!”

Unfortunate circumstances prevent this from being a possibility thus I keep it in my head.

My route ruefully takes me in the opposite direction; So after a nice short walk to the tube station and down to the platforms we part ways.

Fader is a lovely girl and I am very glad for the all too brief few hours in her presence.