Last night I kicked off Body Confidence Week on the blog.  Next The Student takes on the topic of Body Image and Confidence with an update following on from her post New Year’s Deja-Vu

It’s been a while since my last post on 30 Dates (blame it on the post-New Year exam period) and if anyone has a fantastic memory they will recollect that I’ve been feeling a little petrified about actually liking someone, The Wrestler. After drunkenly taking the dive to sleep with him, I hadn’t heard from him after attending his birthday party.

I was confused, uncertain as to whether I had done something wrong or whether I should be furious at him?

All I knew was that I needed a text from him, just to say hey. That’s all.

Just to let me know everything was cool between us. When you work with someone and your relationship alters beyond your working relationship, I find it helps to clear the air a bit before you have to see each other in a working capacity. Or maybe that’s just me?

Now I’d predicted that when I saw him at work I’d go into defence mode, and act as if he hadn’t hurt me and I didn’t really care. In fact, I was expecting myself to be a bit rude. I surprised myself. When I saw him I couldn’t hide the fact that he’d hurt me, without even realising it I’d shown him in my reaction towards him that I was upset. And he could definitely tell.

He apologised to me that evening. Saying that he’d spent his actual birthday in a pit of despair and self-pity over the way he’d treated me, knowing that he needed to apologise to me.

Okay, so surely he should then have apologised, and then no pit of despair would be needed?!

Nevertheless, I forgave him. It’s far easier to get along with co-workers, so I wasn’t about to build it into a larger problem. Plus, I still liked him, and was quite smug about the fact that I’d given him cause to be in turmoil. I know that’s quite egotistic, but it’s the truth! It’s nice to hear that someone’s been thinking about you, and that they care enough about you to be upset if they’ve hurt you.

After work we walked together to my bus stop and left it as friends. I knew we weren’t going to see each other for two weeks (he was going snowboarding and then I was heading northwards to Sheffield) and would miss each other but I didn’t want to complicate things again when the gap would be two weeks. Also, I still wasn’t certain whether I should go there again with him, and definitely not the same night he’d apologised to me for a lack of contact.

Two weeks on (Saturday night) and we had work together again.

We’d had a bit of text contact, initiated by yours truly. Again after work, he went to walk me to my bus stop. My stop is after The Wrestler’s and he always insists on walking me to my stop and that I text him when I get home safe. But I didn’t want to do that. I couldn’t let him walk me to my stop; I wanted to stay with him.

I needed a do-over of the first time, as I barely remembered that fantastic moment where the sexual tension finally gets released. I needed to sleep with him on my own terms. So I stopped him in the middle of the street, at half past four in the morning, and desperately tried to invite myself back to his.

I’ve never done that before. I didn’t know what to say! How do you say it? So I fell over my words and stumbled and giggled with embarrassment. It was ridiculous, and The Wrestler was confused, to say the least.

I can’t believe that came out of my mouth, it sounded like I was asking out my first boyfriend when you’re fifteen.

The Wrestler immediately responded saying that he wasn’t in a place where he was ready for a relationship. To which I burst out into laughter, I was shocked that what I’d said had sparked that response, because I knew I wasn’t trying to ask him out.

I just wanted an invite to his bed, for Christ’s sake!

I found myself saying and thinking that I also didn’t want a relationship. And I was being honest.

I spend half my time in Sheffield and half my time in London, and it’s my last year of university so I need to be concentrating on that rather than pining after some guy in London for the next few months. Also I think I’d been hung up on him because I didn’t know what the relationship was going to be. It had mystery and potential. Now it doesn’t, so I can relax. I don’t need to worry about the ‘he loves me, he loves me not’ stuff. I can just be.

The Wrestler took me back to his after I said I didn’t want a relationship either. I had a lot of fun and I’m glad I was able to do it on my terms, even though I made a fool of myself to get there!

I don’t know whether we’ll sleep together again or whether we’ll just be friends. But I know at the end of it all, I value him as a friend and I want to make sure he stays my friend, first and foremost. I also know that I’m done worrying about it, which is a burden off.

I’ve already gone on a bit of a journey with The Wrestler since New Year’s; I’ve gone from feeling intensely excited/vulnerable to where I am now, relaxed. I still don’t know exactly where we stand but it’s not bothering me anymore.

I don’t feel vulnerable or scared about it, and that brings me on to Miss Twenty-Nine’s Body Confidence Week on the blog.

I’m feeling chilled about The Wrestler.

I don’t feel as if I have to be anyone or anything for him. I never did, which I think is what I liked about him. And the truth is you shouldn’t have to feel you have to overly-preen or perform for a guy to like you. If someone makes you feel inadequate or as if what you are on your own isn’t good enough, they aren’t for you.

And so here I am, being me for myself, bare-faced and proud because I don’t need the make-up to project an image of myself for people. 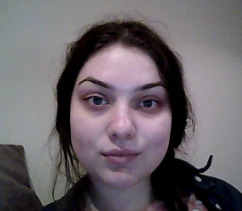