Time for the second date of the 30 Dates Around the World ….

It’s Easter Weekend and The Coincidental Dater and I decided to make the most of the long weekend with a trip to Amsterdam.  As with Dublin, it’s a city I’ve been to before, but don’t really remember visiting (I was a child when I was last here, which means a very different experience!).

So far, finding dates abroad hasn’t proven too complicated, though I know I shouldn’t speak too soon as my third Date Destination is Prague next month!  Before the weekend, we’d managed to set up three tentative blind dates, meaning we wouldn’t have to resort to a last minute Tinderfest on arrival!

The journey over to Amsterdam wasn’t the easiest.  We flew over on Good Friday, and someone, in their wisdom, had decided to not run the regular train service to Gatwick from London Bridge at all that day.  We only realised when we got to London Bridge, already running rather late.  By the time we’d got to Elephant & Castle, where trains were still heading to the airport, we knew we would arrive at Gatwick station two minutes after our gate closed.  We spent a fraught, very slow, train journey, trying to work out what to do if we missed our flight.  We literally sprinted out of the station, onto the shuttle train between the terminals, through security, through the shops, and a good 200m from the shops to our gate.  Our Gate had said Closed as we’d gone through security, but as we arrived the queue was still boarding the plane.  We all but collapsed in our seats – it had taken us less than 20 minutes to go from sitting on the train to sitting on the plane!

On Friday night we had planned a completely blind double date through a blog reader, who contacted me over Twitter.  Unfortunately crossed wires and phone issues saw us not meet up with the guys, though we did get to try out a really nice restaurant and bar in the process.  They had agreed to meet us at the Hotel Okura in the south of the city.  One of the tallest buildings around, there is a cosy bar with a view of the city high on the 27th floor.

I was more optimistic about our date on Saturday afternoon.

Some months ago, one of the directors of the Inner Circle approached me.  It’s an elite European singles networking site.  With active sites in Amsterdam, Barcelona, London, Milan, Paris and Stockholm, and plans to open in 5 more European cities, and New York and Sydney, the site feels a bit like LinkedIn meets dating.  ‘Elite’ business professionals, who also happen to be single.  The site is invitation only, so you have to know someone in the club to get invited in.  Inner Circle run events in each city every month or two, and while I’m yet to attend one yet, I know Miss 32 enjoyed the event she went to a few months ago.

As I don’t have any friends working over in Amsterdam at the moment, the Inner Circle seemed like the perfect way to find a date.  I changed my location to Amsterdam, made it clear I was just coming out for Easter weekend, and was looking for a double-date for myself and a friend, and waited to see if anyone got in touch.  Maybe it was the idea of a group date, maybe it was the fact I was a foreigner visiting the city, but several guys got in touch early on.

I liked the South African immediately.  I wasn’t overly attracted to him, and at 41 he was far older than the guys I would normally date, but he seemed really nice and normal.  He kept regular contact in the run up to the weekend, and asked sensible questions, trying to help us with planning our stay.

We arranged to meet for lunch on Saturday, at a place he described as the ‘Little Castle in the middle of the square’ – de Waag.

A rather necessary tool in international dating is Whatsapp – a way to send text messages internationally without having to pay, though it does require wifi.  The South African rather intuitively realised we wouldn’t be able to check Whatsapp, and sent us a text message to let us know where he and his friend were waiting – Cafe Del Mundo, in the Nieuwmarkt square.

We found the guys easily, and settled in the sunshine outside the cafe for a quick drink. It was evident early on that they shared our sense of humour, and so we clicked quickly and easily.  By the time we walked through Amsterdam to find a spot for lunch, they already felt comfortable enough to spin a completely false yarn about the history of the canal and how it was first discovered.

We found a pub by the Amstel for lunch, and after salad and sandwiches, the guys asked us if we’d like to see the city from the water. The South African owned a small boat, or yacht as he joked, and was happy to take us on a tour of Amsterdam in it.  Having worked out that they seemed genuine enough and trustworthy, we took the Metro to the south of the city, popped to the South African’s flat to grab drinks and supplies, and then went in search of his boat.

I have to admit to thinking the sarcasm was still continuing, as we approached the river and he gestured to a small, rather basic, rusting metal tub, filled with rain water.  But as the South African disappeared off to get a bucket to bail out the rain water, we quickly realised it wasn’t a joke!  To be honest, on the narrow canals, the tiny boat was all we really needed.  Once the boys had emptied it out, we jumped in, and cracked open bottles of South African champagne and beer.

We spent a really fun afternoon, seeing the Dutch capital from the water, navigating our way down the Amstel, and dodging a rowing race which ran late into the night under spotlights.  We were shown the Magere Brug – Van Gogh’s Skinny Bridge and the Amstel Hotel (and told a pretty funny tale about Barbara Streisand staying there) before heading down towards the Riksmuseum. In the process, we rather amusingly went the wrong way down a one way strip of canal, only to be told off by the water police.

Our hosts were really good fun, and after a good two hours on the water, we decided to cancel our dinner plans and extend our Double Dutch Blind Date into the evening instead.  Meanwhile the boys, who had been heading to a local microbrewery, adjusted their plans to accommodate us too.

Our first choice for dinner was a local Greek restaurant, but when we realised that every other diner in the restaurant was on a hen do, we quickly changed our plans and headed for a cool local restaurant called Cafe Vrijdag.  We had a really lovely meal, and rounded off a really good day exploring Amsterdam.  As The Coincidental later said, we couldn’t have asked for a better day with two complete strangers.  The guys were really fun, and so accommodating – we saw a completely different side to Amsterdam than we would have simply following guide books and tourist maps.

Our date lasted the best part of nine and a half hours, though surprisingly there is very little to report.  Which is why I think it worked so well.  It was just a very fun, relaxed day in the sunshine.  When I first planned a date in Amsterdam, I’d wanted to visit a traditional Coffee Shop and have my first ever stoned date, but actually the day was a very adult, fun day, and probably more realistic of a date in Amsterdam than heading to any of the tourist spots would have been.

It was interesting, as the South African admitted to not having had great luck using The Inner Circle, and after almost six months on the site, he’s the first person from The Inner Circle I’ve met up with, but if I were to use him as a bench mark, he was a really genuine, interesting guy.  Whilst the South African didn’t think it was a particularly elite site in Amsterdam, or a good way to meet people in his own city, I definitely think it’s a great tool to meet people in other cities if you travel a lot with business.

Tired out from all the food, alcohol, fresh air and sunshine, the Coincidental and I headed back to the North of the city, where we have been staying in the brand new Brooklyn Hotel.  Our hotel literally opened last week, and is a work of art, with floor to ceiling windows spanning the room.  A beautiful creation, slap bang in the middle of the most industrial, Shoreditch-esque part of Amsterdam, we have to take a special free ferry to it from Central Station each day, which has actually been quite a fun way to start and end the day.  However when we’d booked the room, they’d failed to mention that a full on music festival would be taking place at the foot of the hotel, and that the floor to ceiling windows aren’t sound proof!  So we returned from our Double Dutch Date to find this going on outside …..! (And three other tents which looked very similar at all angles of the building!) 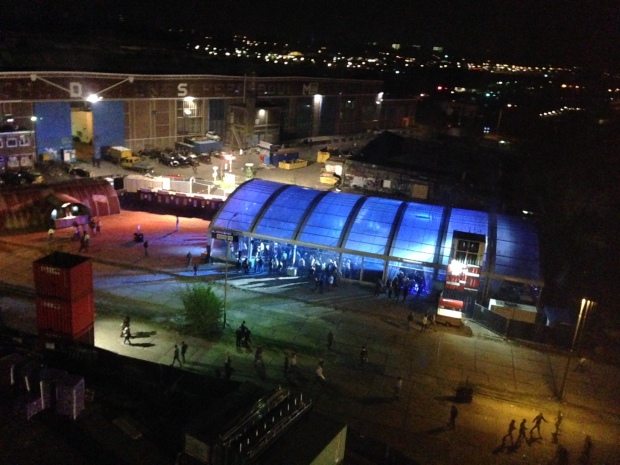 Definitely an interesting end to the evening!

Sorry there are no stoned or sex show stories to tell! To be honest I’m surprised we managed to have such a civilised date in one of the world’s most debauched city!  We didn’t fully escape the Red Light District, and did check out the Sex Museum while we were here, though not with our dates!  But somehow, despite the questionable location, the blog’s first double blind date was a real success.