The thing about blogging, is that by its very nature, most of us do it in our free time.  I’m not writing this post from a fancy office during business hours.  It’s written on my sofa, while I sit here in my pjs, choosing to blog instead of heading out into the May sunshine.

Blogging is one of the rawest forms of writing you’ll find online today.  It’s live – most of us type as we go – and it’s not sub-editted.  You hear the writer’s voice, and only the writer’s voice.  And if you look at the topics we’ve talked about on this blog alone – Body Image, Sex, Penis Size, How we see ourselves in the Mirror, Love, Being Dumped – it’s an extremely personal thing.

When I write a post, I’m always aware of who might read it.  I know that my senior managers at work know about the blog, for example, and that the team I manage know where to find it – and so I make clear to never say something on it that I wouldn’t be happy being overheard saying in the office I work in.

But I am in control of the way that information is presented.  I choose when and where I post it.  They are my words, and I can choose the platform in which they are shared.

Recently, a dating website commissioned me to recruit bloggers to write for their own dating blog.  For me, it’s a great experience.  I’ve spent the best part of a year immersed in the Dating Blogging scene, and I know whose work I like to read, and whose I tend to skim over.  I’ve also grown to understand the different dating websites, and what markets they hope to appeal to.  I’ve done freelance writing for a number of different dating sites (as you may have noticed from Twitter retweets), and I think it’s a big honour as a writer, to have someone come to you directly for your opinion or your work.

With that in mind, I began recruiting a team of writers to help with the project, many of whom you’ll recognise in the coming weeks, when I begin retweeting their work!

For me, being paid to write about dating is a dream come true.

It’s not my ‘dream job’ (I’ve wanted to be an author and hold my own book in my hands since I was a child), but it’s being paid to do something I spend hours each week doing for free anyway.  And it’s something I’m passionate about.  I know the British dating scene.  I know what works, and what doesn’t.

And so with this in mind, I approached several different bloggers, to ask if they also wanted to be paid to write about dating for this project.

As expected, most jumped at the chance.  Writing for a famous site provides exposure.

Now this exposure in itself is interesting – there are a number of blogs out there, which very clearly make a lot of money from advertising.  Not that I’m saying that’s a bad thing  – personally I don’t use ads on 30 Dates, in part because I could never work out how to add the adverts I wanted on my site!  I know WordPress automatically adds adverts to every free hosted site, but this isn’t something as a blogger that I receive anything for.

And I’m of the opinion, that if you write your own blog, you should by all means benefit from advertising, should you wish.

However, if you are using other peoples’ writing to get attention to your site, then making money off the advertising, and not paying those other bloggers, I don’t think that’s very fair …. I won’t name names, but I know of at least three Dating Blog Sites which work on this model, and as an independent blogger I don’t really like that kind of set-up.  The person making the money isn’t the person behind the advice and writing which is making the money …

So a few weeks ago, I began recruiting a team – in my opinion, some of the best dating writers I’ve read recently – all of whom write in a tone I thought might work well on the blog I was editing.  As expected, most jumped at the change – we very rarely get paid for our efforts.

To be honest, the affront really shocked me.  As a dating blogger, I understand an unseen code of conduct.

Though shall not steal!

If I’m approaching someone with an offer of work, I do so honestly and honourably.  I don’t want to steal your titles!  (As The Coincidental also pointed out, come on, they’re just titles!  It’s not like he was handing over the ideas behind Facebook!)

In the end, I retracted my offer.  I needed to know the titles of proposed pieces, to make sure they fit in with my understanding as editor, of the overall tone of the website.

But it definitely got me thinking about the Code of Conduct between bloggers.

As a blogger, we share our thoughts and sometimes most intimate secrets.  And those words and thoughts are protected by copyright law.

Whilst an idea is not protected in the same way, I would never think to steal someone’s ideas.  Mainly, because I like to think I have enough of my own!

The Copyright issue has also been a big one this week, because I, and a number of other bloggers realised a site called Kinkementary is completely ripping off our work.

When I say ripping off, what I mean is actually completely taking our posts, and republishing them on the site, with only one change – the author’s name.

He literally takes my posts, and republishes them within hours.  Often simply changing the placement of the photos – 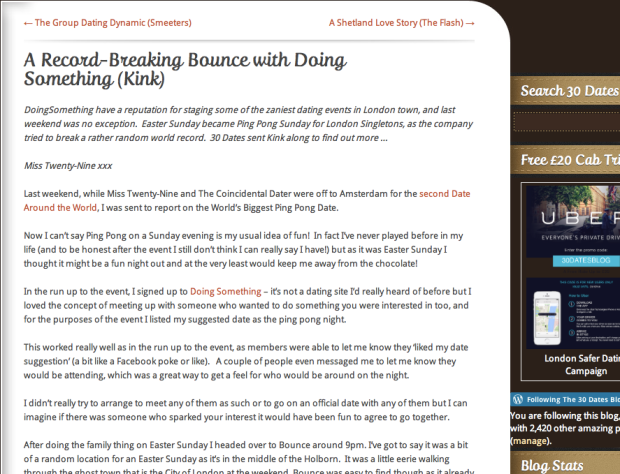 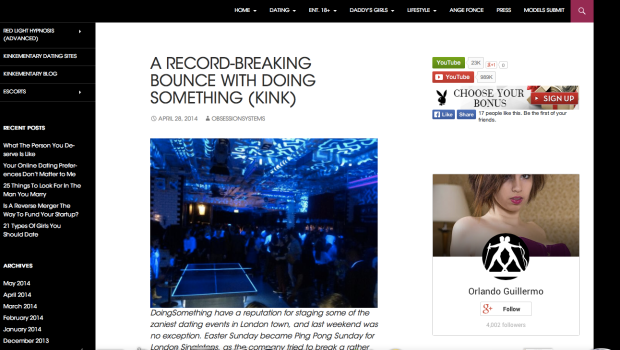 The only way I actually realised the site’s owner Orlando ‘Guy’ Guillermo was stealing from me was because of the links I, myself, had placed in the original text.  He hadn’t thought to remove them, so the pingbacks registered on my blog, notifying me that someone else had written something that linked to my blog.  He hadn’t.  He’d copied my own text, which linked to parts of my own blog!

To be honest, at first I wasn’t sure what to do.  I tried to complain to WordPress, but they don’t host his site.  Then I spotted a dialogue involving Lisa Schmidt, the Detroit Date Coach, on Twitter.  She had mentioned Kinkementary … I looked further at the conversation, and realised Orlando Guillermo was also stealing from her, and several other dating sites.  It turns out none of the ‘dating advice’ on his site is his own, and no one had given him permission to copy their work.

Thanks to Lisa, I realised who his host site was – GoDaddy.  The Go Daddy process of filing a copyright claim is rather arduous – you have to send a very template-like letter to them, otherwise they won’t listen, however I’ve noticed every copied post I have complained about has been removed within a week.  The problem is, for several weeks, his site copied every single thing I posted on 30 Dates.

Though something tells me he won’t rip off this post!

To be honest, above all it’s really frustrating.  Some of the content of his Escort Service site is vile, and I would never voluntarily link my work (or the work of the Experimental Daters, who give me permission to post their stuff on 30 Dates) on a site like his.  I haven’t given him permission to copy my words, or the words of the blog.

So why should I have to spend all my spare time writing emails to Go Daddy to take it down.

A few days ago, the site’s owner even had the audacity to reply to a post by Lisa about the whole drama (which I reblogged on here a few days ago), with a video (apparently filmed in an Apple store???) detailing why he feels perfectly legitimate stealing our work.

Apparently he’s just like Google.  He’s not a website committing copyright infringement by stealing our work.  He’s a search engine.

The Video that I embedded here has been taken down!!!!

From that video, I genuinely don’t think he understands the severity of what he’s doing.  Yes, we may only be small time bloggers, but it is still copyright infringement, which is a crime.  And whilst bloggers like me and the Detroit Date Coach can only pursue him through Go Daddy’s official complaints procedure, some of the bigger people he’s ripped off – Yes this guy has stolen from Patti Stanger, the Millionaire Matchmaker, and David Wygant, a big US Dating Coach – will hopefully go at him with far more sophisticated legal teams.

Because he’s not just stealing our work, he’s also degrading it by associating it to some of the other things on his website – teenage ‘wet dreams’ for example.

I’m not gonna give this guy any more airtime on my blog, but I have to admit to being genuinely surprised that in this day and age, something like this can happen over and over again, and someone can be so brazen about it!

As bloggers, we’re all in this together.  And we should be looking out for each other.  We all dedicate hours of our life to sharing our stories and advice, and rather than ripping each other off, we should be celebrating each other, and each other’s work.

2 Comments on A Blogging Code of Conduct – Not Stealing Other People’s Words!