This afternoon a friend showed me the hilarious BuzzFeed about artist Anna Gensler’s visual responses to some of the appalling messages she was sent on Tinder.

‘Wanna give me head?’,  ‘I want to stick my dick down your throat and luck (sic) your clit’, ‘Do you work on a chicken farm, cuz you sure look like u know how to handle a cock’, ‘If I was a watermelon, would you spit or swallow my seeds?’, ‘I bet your (sic) tight’, and my particular ‘favourite’, ‘I wanna tongue punch you in the fart box’.

As you can see, Anna’s response is to do a sketch of the guy in question, add a gut and a tiny penis, and send it back to him.  Brilliant!  Her instagram account is well worth a follow.

And whilst the sketches will make you smile, there’s a sad reality underpinning her entire account.  These are all real-life messages sent by men on a dating app to women with genuine intentions to meet guys online.

To be honest, I’ve never had anyone asking to tongue punch my fart box, but the way some men behave on Tinder is a reminder of the effect anonymity has on peoples’ behaviour – even, ironically, on an app which shows your name and face!

As I’ve experienced with the occasional blog troll, people say things behind mask of a computer screen, that they would never say face to face.  And this odd kind of Dutch courage seems to be affecting the way people communicate on online dating too. 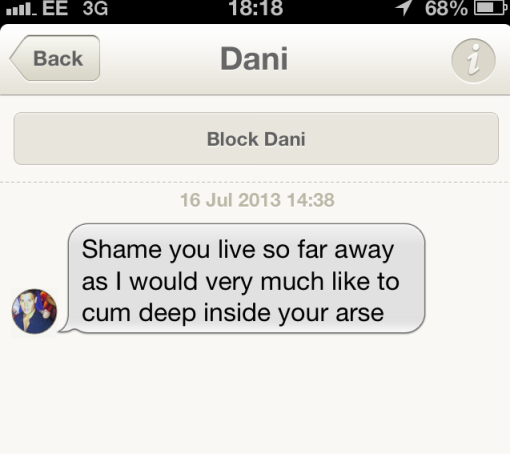 And whilst few guys will send you something quite so forward that quick, I’ve had several experiences of giving my phone number to a guy, only for him to almost immediately then Whatsapp me a photograph of his penis.  (Often from a really unattractive and unimpressive angle!)

More recently, I stumbled across ‘Charles, 33’ who had a series of photos on Tinder (which I *may* have shown both Gina Yashere, and B*witched during my interviews with them last week!), where he had posed in various positions, fully naked, displaying his erect, and rather veiny, penis from several angles.  And interestingly including his face in one of the shots.  This was a Tinder profile which any straight female in the area could see … obviously he doesn’t have any work colleagues or friends on the app?!

Rather than post a gallery of the various dick shots I’ve been sent in the past year on Tinder, I will direct you to a rather entertaining blog post by Emma-Louise Trotter.  Be warned – it’s not for the faint hearted – she’s posted the most vile and entertaining photos of male genitalia that she’s received during her time on online dating sites, including a particularly odd one by a very very dirty mirror.

I’m not here tonight to state the obvious – that internet dating seems to have gone out of control.  That Tinder and free dating sites have rendered us all essentially faceless.  Just names and carefully-chosen photos, who other daters feel comfortable sending any kind of messages or photos too.

Or to look in detail at some of the examples of the messages sent to Anne, and wonder what kind of woman these men are seeking to impress.  Is it just a joke?  Do they not care at all?  Do they simply want to shock and disgust strangers?  Or is there more to it?  Does Charles, 33, actually think someone will see his erect, veiny cock and decide she needs to get some of it, asap?!  Do some girls genuinely want to sleep with a man whose erect penis can be seen by any single woman in a 10 mile radius with a smart phone?

No, tonight, I want to talk briefly about the context of communication.

Because weird and unattractive as those messages from the American guys on the InstaGrannyPants site are, they are extreme versions of things we all might say in the bedroom, or in a naughty text to someone we’re intimate with.

I would be lying if I denied ever sending a text message to a boyfriend or partner, suggesting exactly where I might like his genitalia to go sometime soon!  Yes, I probably said it more eloquently than ‘fartbox’ man, but I’m not going to pretend I’ve never sent an explicit text.  The difference, is I chose who I sent that explicit text to.  And it wasn’t unrequited.

The odd thing about sexual and romantic relationships, is the speed at which the social intimacy develops.  You can go years knowing someone in a platonic manner, and never get beyond formal communication.  And yet, when you’re seeing or dating someone, the minute sex enters the equation, your vernacular with one another changes.  Whether simply in the bedroom, or in the messages you send to one another.

But that language needs to be put in context.

It’s acceptable to send the man you’re shagging something on the lines of ‘Can’t wait to have your cock inside me.’

Less so, to send a complete stranger from a dating website ‘I want to stick my dick down your throat’.  (Seriously, how is using the word throat ever attractive?? Just reading it makes me gag!)

Just because our dialogue in intimate relationships moves quicker, and is more honest and base than it is with other people, doesn’t mean you can say whatever you please to complete strangers because they’re single and on a dating website!

So big props to Anna for facing these idiots head on, and showing them what she thinks of them, in such a visual, amusing way.  Most of us just shake our head in despair, click the block button, and eventually give up dating apps!