So, the good news is, someone actually bid for me! Huge sigh of relief … didn’t have to clamber down off the table in shame!  And yes, it was every bit as daunting as I expected it to be!

Earlier this week I told you guys about the Date Auction my friend The Entrepreneur was organising for the charity Scope.  She’s a bit of a pro when it comes to these events, in fact previous auctions have led to romance and even marriage!  (This was the sales pitch I got when she convinced me to take part!)

As a result, last night, together with seven other volunteers, I stood wobbling atop a table (in four-inch heels!), at Beaufort House in Chelsea, keeping my fingers crossed that someone would put his hand up and bid for me! 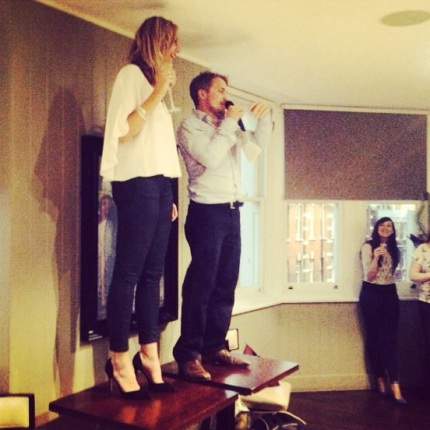 A date auction is a funny thing – because it revolves around selling yourself, judging someone almost solely on looks, and paying for a date … all things which sound negative, but are actually everyday realities in the dating world.

Anyone who uses online dating is used to selling him or herself.  Packaging yourself in a certain kind of way, and hoping that you’ve represented the most attractive parts of your personality, and selected the most flattering images of yourself.  Thanks to social media we’re a generation well-versed in marketing ourselves.  We carefully select the snippets of our lives that we want the world to see, and the parts to de-tag.

When it comes to judging someone by his or her looks, we all do it, regardless of whether we’re single or not.  First impressions normally start with appearance, because that’s often what comes first (unless you chat to someone over the phone).  And the reality of online dating is that success depends heavily on your photos.  Websites are set up so that you see the photos before you click to read more about another dater.  Tinder is living proof of just how important looks are in the dating world.

Finally … I have to admit, on face value the idea of paying for a date sounds a bit seedy!  Like you’re an escort, or like a price tag is being placed on you.  And then I took a step back, and remembered I’m a girl.  And as a girl, often men will pay for my first date with them.  No they’re not giving someone cash to meet up with me, but they’re buying me drinks or dinner, or paying for the entry to an event or venue.  For men, ‘paying for a date’ is an everyday reality, which often women take for granted.

So … back to the auction…

The interesting thing was that for once, as a singleton, I wasn’t actually marketing myself.  There was a guy with a microphone doing it for me!

I mentioned in my last post how daunting the idea of being judged almost solely on my looks is.  I’m a personality girl.  I’ve never depended on my looks to get attention, and as a result, I have a pretty strong personality.  I’m also pretty independent, and think I know how to market myself online relatively well.  So it was rather odd having to hand over the reins to Tom the MC, and have to stand impotently at his side, grinning nervously as he reeled off facts about me!  It was interesting to see which things about me he selected from lengthy pre-auction questionnaire I’d filled in.  Given the crowd of people bidding, if I’d had to ‘sell myself’ I’d probably have gone with the travel card – I travelled round the world on my own for three years, including two ski seasons in Whistler.  I’d have maybe thrown in the fact I’ve just started writing for the Guardian, and that I’ve played cricket at Lord’s three times.  Random snippets of the past thirty years which I feel sum me up as a person.  Tom is a single guy who I’ve met a couple of times before, so it was interesting to see how he interpreted my questionnaire, and which parts he thought would sell me best to the crowd!

He picked the fact I speak Mandarin (appallingly), told the crowd I’m really really excited about moving to London next week (probably the biggest understatement of the night! 🙂 ) and then asked me to tell a joke.

My joke (the only joke I can ever remember!) was ‘Why do elephants have Big Ears?’

This was obviously a good selling tactic, because the punchline ended up securing me an extra tenner at the end of the bidding!

The part I found most interesting about the auction, was how nervous the guys were too. You could see it in their faces when they stood on top of the table.  The eight of us had clearly been picked because we’re confident people, happy to stand up in front of a crowd of friends and strangers and essentially be valued. Before the event the guys made jokes and bets – claiming that it was a competition, to see who went for the highest.  Meanwhile the girls clutched their drinks tightly, and scanned the room nervously.  A few people suggested I ‘work the room’ in preparation, but the idea seemed a bit false to me.  And so I stayed with the people I knew, hiding away with my friends, including Miss 32, who had come along for moral support (and to bid – she won the first man!).

But the minute they climbed up on the table, it was obvious the guys felt just as awkward as the girls.

No one likes to be judged, especially not publicly.  So hats off to all the guys and girls who volunteered – together we raised over £700 for Scope and the Rotary Charity Fundraisers.

But also a huge thank you to everyone who came along to bid.  The Entrepreneur is one of the loveliest people I’ve met during this 30 Dates journey (she owns the dating events company Table8, which I recommend to every London singleton I meet) , and she genuinely has a really good bunch of friends.  This was evident in the bidding last night.  People were bidding with their girlfriends, wives, boyfriends or husbands by their side, simply keen to donate to charity, and to support The Entrepreneur.  Everyone was so fun, and welcoming and supportive, that even wobbling on a table, looking out at a sea of unfamiliar faces, I was made to feel appreciated and accepted.  And once the ordeal was over, I made a lot of new friends.

By the sounds of things, the guy who bid for me will be taking me on a group date with some of the other auctionees and their bidders!  There’s even talk of a private jet … so watch this space on that one! 🙂

I ended up bidding too, and have a date set with a gent who appeared at the auction in a top hat and tails, fresh from the Ascot Royal Enclosure, and was announced as having been expelled from Harrow – just my kind of man!

Would I do it again?  Maybe … after all it was all for a very good cause!  Though I think I’d prefer to be the one selling everyone off – that looked amazing fun!

2 Comments on Standing On A Table Having Men Bid Money for Me ….