The end of a relationship.

The unfortunate reality is that most of us have been there before.

And no matter how long or committed the relationship, there’s an adjustment period involved.  I’ve talked about break-ups before –  the ways to get over someone, and being aware of being on the rebound – but there’s one part of breaking up which is particularly pertinent to me as a blogger.

How to deal with a break-up in a dignified manner.

Because unfortunately there is frankly a lot of man-hating crap out there on the internet!

In the same way that internet trolls hide behind a computer screen and post vile comments on other peoples’ blogs, Twitter and Facebook accounts, there are also scorned women who use the internet as a way to try to get over a guy.  And to be honest, I don’t think these anonymous women are any better than the trolls.

As someone who shares a lot on the internet, even I know there’s a time and a place for sharing.  And you have to be very careful with exactly what you choose to share.  Some things are best kept to yourself.

My case in point is the blog I mentioned a few days ago.  A friend of mine split up with his girlfriend, and the next day, completely anonymously, she sent me a couple of very bitter, man-hating blog posts, which she was hoping I’d post on 30 Dates.  I didn’t realise the emails were about someone I knew.  However, the fact they came from an anonymous email account, set up only for the purposes of contacting me, rang alarm bells before I’d even read the pieces.  I replied back as I would to anyone – sorry, but these aren’t really in the spirit of my blog.  Hope you’re coping ok, chin up, it gets better …  That kind of thing.

And then a few days later, I stumbled upon a Twitter account and blog set up by this girl.  As I hadn’t posted her blog posts, she’d decided to start up her own dating blog.  Except it wasn’t a dating blog.  It was the ramblings of a scorned woman, going into lengthy detail about how her ex had gone about breaking up with her.  Literally a blow by blow account of the way they had split up, even down to the things he’d said whist he was dumping her.  My friend wasn’t the only casualty of the blog.  It seemed years of resentment had overspilled into the posts she was posting.  And to make it worse, the blog isn’t anonymous.  She’s using her name and photos of herself alongside the posts.

Don’t get me wrong – I understand what it’s like to be hurt by someone you care about.  And as someone who deals best with things by writing about them, or talking to someone else, I understand the power of venting. But there is a time and a place.

And writing angry, emotional (and probably drink-fuelled) posts about an ex, for all the world to read, just days after you break up, really isn’t the way to deal with things.

The internet may seem like a big place, but it really isn’t.  I stumbled upon this girl’s posts completely randomly, and within 36 hours of them going up on the net.  I’ve never even met her, and yet I recognised her from Facebook pictures of when she was dating my friend.

I’ve always had this rule about 30 Dates – unless someone was incredibly rude on a date (in which case I’d have probably said something anyway!) – I would only ever write things about guys which I was happy for them to read themselves.

However, actually I should extend that.  As I occasionally write about sex on here, I won’t go so far as to say that I would only ever write stuff on here that I would have been happy for my parents to read!  But my old English teacher from school subscribes to the blog, and so I guess I often write with that audience in mind.  Am I happy for my former deputy head teacher to be reading what I write?  Yes … ok, carry on!

The problem with the internet, is once something is posted, it’s pretty much there for life!  Even if you remove stuff, people can make copies or take screenshots.  Just look at all the Tweets that are removed in minutes, and yet still make their way halfway around the globe.

I get that guys can do really shitty things to girls.  And that girls can treat men just as badly.

But remember, there are always two sides to every story.  And do you really want your side to make you out to be some kind of man-hating lunatic?! 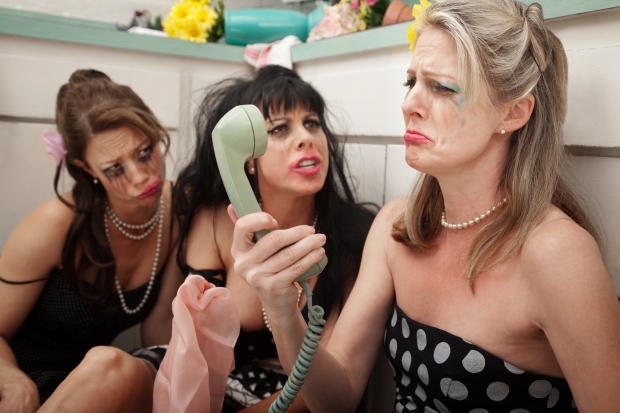 Hindsight is a powerful thing.  Look back on the guys who hurt you years ago, and think about them now.  Most of the time, it’s probably with apathy.  Yes, it hurt at the time, but you’re over it.  So now, think what would have happened if you’d spilled the contents of your private diary about the way those guys treated you, and posted it all over the internet.  Would you really want those words to be up there for everyone to still see?  Do you want those thoughts and feelings attached to your name and image, for future boyfriends to see?

The lesson applies not just to blogs, but to all social media.

Look at Jordan’s recent tweets about her husband cheating on her with her best friend.  Within six weeks, they are back together, and she’s having to make public statements about why she decided to take him back.  Surely if she hadn’t acted so emotionally and suddenly, and had held back before sharing the dramas of her relationship with all her fans, she could have kept things behind closed doors, before she’d made any life-changing decisions.

We’ve all been hurt.  And maybe my guy friend did treat this girl really badly – who knows?  There are always two sides to a story.  The thing about relationships, is that you never really know what goes on between two people.  You can make assumptions from the snippets you hear, but the only people who know the truth about a relationship are the two people in it.  And that’s not always a bad thing.  Some things are best left between two people.

Even if someone treats you really badly, be the bigger person.  Rise above it.  Fix a smile, save the man-hating tirades for your diary and your best friends, and avoid social media, until you’re in a place where you know you won’t blurt or over-share.  Because it’s not dignified.  And you’re better than that.

Six months down the line, you’ll realise there was a reason you didn’t stay with the person who treated you badly, and rather than cringing over things you wrote in the heat of the moment, you can be proud that you didn’t show the world how much the break-up affected you.