A year ago I went on 30 Dates with complete strangers.  Most were friends of friends, or friends of friends of friends … A couple were found by other methods!  This time last summer, Tinder was still very much in its infancy, and it was on the new app that I came across the Jet-Setter.  I remember being attracted immediately to all the extreme sports photos he had on his profile.  We got chatting, and it turned out he was heading off to live in New Zealand a few weeks later (one of 4 of the 30 Dates boys who moved abroad in the last year).

And so I invited ‘The Jet-Setter’ on a plane trip with a difference – we tried out pop-up dining experience Dine Mile High and climbed aboard a theatrical flight to Mozambique, in a derelict Post Office in Notting Hill.

The Jet-Setter earned his name from his exotic lifestyle.  A professional yacht racer, he spent his life travelling the world, and working on the most expensive boats in the world.  Just one of the interesting and intrepid characters I met on my 30 Dates Challenge.

So what’s changed in the Jet Setter’s world in the past year? 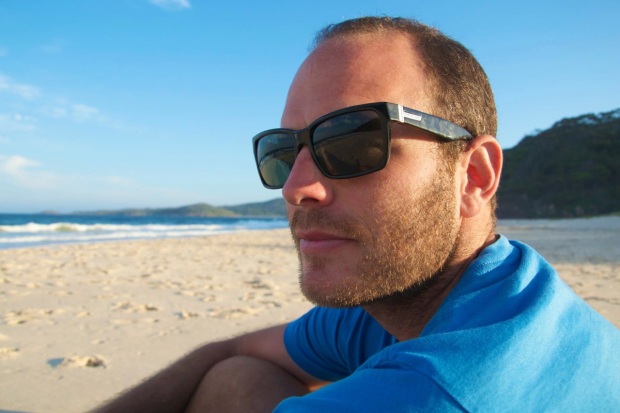 The Jet-Setter moved from London to Auckland, changing career from racing yachts professionally, to working for the world leader in carbon composite masts (a part of a yacht, for those of you not-so boating minded!).

Like most of the 30 Dates boys it seems, he is no longer single!  He met his girlfriend through mutual friends out in New Zealand, and it sounds like they’ve had some rather fun dates over the six months.  The Jet-Setter describes his most adventurous date as a “9 hour hike up one of New Zealand’s tallest mountains, which is an active volcano!”.  As for his best date?  “On Valentines Day we had plans to go to a Chinese Lantern Festival only to find that is was totally rammed and impossible to relax.  So instead we just wondered around Auckland talking rubbish, eating street food, and taking in the amazing sunset and expansive views of the Auckland harbour from the top of a hill”.

What did 30 Dates teach him about dating?  “That maybe I need to up my game – I think it’s cool the extent that some of the other guys went to on their dates!  Good on you men!”

And the biggest lesson he’s learned this year?

“That the World is a truly stunning and uplifting place with so much to take in. It’s easy to get lost in the rat race of boxes to tick off before we are considered social outcasts. Adventures can be life-size, soul-filling and bigger than your dreams….when you start doing the things you love the most, everything else will come to you at the right time. Adventures are the only thing you can spend money on that make you richer!”

Wise words, from a very fun and adventurous man!

To see more of his exciting year – check out this YouTube video he made!

Complete Legend!  Big thanks to the Jet Setter for revisiting 30 Dates one year on, and from the other side of the world!