So normally around this time each week, I give you my London Date Venue suggestions.  However, most of this week I’ve been up in Edinburgh at the Fringe.  As the Festival is only halfway through, and I know a lot of you still have plans to attend, I thought I’d give you some ideas, based on the shows I went to in the 5 days I was in Scotland.

First off there’s Tom Craine’s ‘Thoughts on Love‘ which I reviewed earlier in the week. (7.05pm, The Pleasance Bunker 1)

Here are my other recommendations for Edinburgh Fringe –

The Chicago-based musical improv troupe are incredible.  We went to see two of their shows while I was in Edinburgh.  First off we watched their Completely Improvised Musical.  Every night, at 8.45 at The Roxy, they perform a completely improvised musical, based on a random suggestion shouted from the crowd.  How do I know it’s completely made up on the spot?  Well, my friend just happened to get his suggestion heard!  He shouted “Donnie Darko Does Dating” out (a phrase he’d come up with over dinner), and we watched an hour-long musical where Donnie Darko travelled through time and space, visiting dinosaurs, saving JFK, and falling in love.

The troupe are brilliant.  The show was funny, and incredibly well choreographed and put together, considering often the cast were literally working things out as they spoke or sang.

Our second taste of Baby Wants Candy was their hilarious late night “50 Shades of Grey – the Musical Parody”.  Words cannot describe how awkwardly brilliant this musical is.  We curled our toes, whilst crying with laughter, as characters simulated sex over audience members, high-fiving everyone around them.  And we belly laughed as the world’s most unlikely Christian Grey limbered up in a bright red mankini.  The satire was silly, but intelligent, with all too accurate observations of the book which took the world by storm a few years ago.  The entire ensemble of both shows were brilliant, but Chris Grace and Nick Semar, who starred in both, both stood out particularly.  Nick’s portrayal of ‘Jose’ in 50 Shades literally had tears running down my face.

We also ended up seeing comedian Tom Binns twice.  The first time we watched his stand-up show at The Pleasance.  The show is shaped around his internal ‘little devil’ –  a side of his humour which has seen him pay hundreds of thousands of pounds in damages, get arrested, and even spectacularly be fired for Treason from a radio job, for making really inappropriate jokes about the Royal Family live on Christmas Day .  As part of his stand-up show, he adopts two very well-loved personas.  Ivan Brakenbury – a cringeworthy-ly accurate portrayal of a highly inappropriate Hospital Radio DJ – and Ian D Montfort, a hilarious spirit medium from Sunderland.  Binns explains that he invented the latter to show people that anyone can pretend to be a psychic, but then goes on to explain that it backfired, reading a review from an Australian newspaper which described him as a psychic with an incredible talent, masquerading as a comedian!

Ian D Montfort is a brilliant character.  Binns’ humour particularly shines when he’s in character, and so when they announced at the end of the show that Ian D Montford does a free midnight seance, every day at noon on the Grassmarket, we booked tickets immediately.  The next day we crowded into a tiny bookshop (alongside Rowan Atkinson, who was also apparently a fan) and watched an entire hour of Ian D Montfort’s crap, but equally incredible, spirit work.  You assume it’s all going to be rubbish, and that the joke is in how bad the psychic readings are, but it’s anything but.  Some of Ian D Montford’s tricks were better than Derren Brown live.  It’s easy to see where the Australian newspaper review came from!

I wasn’t expecting great things from the Irish trio, mainly because my friend had completely undersold them.  His girlfriend is Irish, and he claimed she would be the only one in the crowd laughing at their jokes.  In reality, they had the entire crowd, including my friend, in stitches for the entire hour of their ‘Loch’d’ show.  Sunday was our mammoth day at the Fringe – six shows in one day.  And by the time we turned up to Underbelly’s White Belly Room to watch them, it was 10pm, and they were our final show of the day.  It had been raining all day, all our clothes were wet, and as Foil was quick to point out, it was a ‘wet sock’ day.

And yet none of that mattered – because the show was brilliant.  I haven’t watched a comedy sketch show since I was a kid.  And the kind of sketch shows I would watch as a child were old re-runs of Morecambe and Wise, or the more modern Goodness Gracious Me.  But sketch shows aren’t a comedy resigned to the sixties, or even the nineties.  Foil, Arms and Hogg (a rather attractive trio of self-effacing twenty-somethings) manage to pull sketch show humour right into 2014.

I’d been worried the humour would be ‘too specifically Irish’, simply based on my friend’s warning, but the boys know their audience.  There were Irish jokes, but they were very clever, and based on outside perceptions of the Irish.  They took the mickey out of Fringe thesps, Christian fundamentalists, and mainly themselves.  Midway through the show, they did a sketch called the ‘Beer Hunter’.  They pick an audience member at random, shake up a can of beer, put it on a tray full of beers, mix them up, and then the audience member and Arms take it in turns to select a beer, and open it in their face.

Arms got covered in beer.  We all laughed, a lot.

It was the perfect ending to a very funny day. 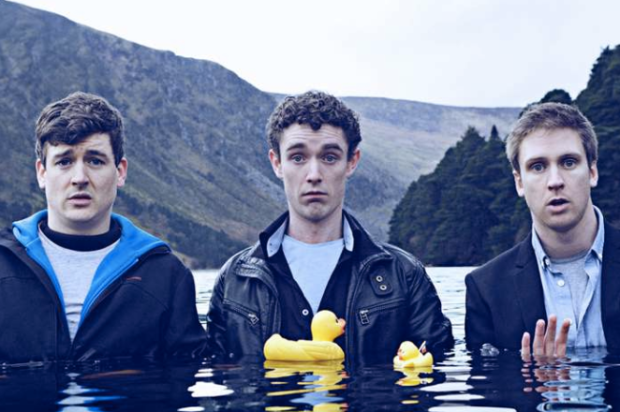 If you’ve never been to Fringe before, I can’t recommend it more.  The most expensive tickets are £15, which means you can fill a day with shows, and still pay less than good seats at a West End Show.  And the comedy is genuinely world-class.  I assumed we’d be watching university-standard entertainment – hit and miss.  And that we’d be lucky to come away feeling like we’d got our money’s worth, even for the shows that cost £6.  But every show we went to was a real treat.  And it really is like tapas.  You dip into something for an hour, come out, and want to head straight back in to a different show.  The guide of shows is like a phone book – the options are seemingly endless.  But it’s incredible to have so much talent and entertainment, made so accessible, for an entire month of the year.  I couldn’t recommend it more!