Last year, when I turned 30, my younger sister had a painting of my life commissioned.  It’s a map of the world, made up of all the important things and people in my life.  There are five people featured in the painting.  My family … and James Bond.

That probably gives you an idea of my take on a James Bond exhibit!  I grew up watching the films, and every Christmas my sister and I still watch a Bond film together for old time’s sake.  And so when I heard about the Bond in Motion Exhibit, at the London Film Museum, I knew I had to go along.

Not to be confused with the British Film Institute, the London Film Museum is about five minutes from Covent Garden tube station.  Running until March next year, the museum is currently home to the most incredible array of vehicles from the Bond films.  Planes, boats, underwater cars, submarines, surfboards, motorbikes, helicopters, gliders – you name it, it’s at the museum.  They even have the cello and cello case, which Timothy Dalton skied in during the Living Daylights film!

I went along with my friend the Fighter Pilot (a name which I know gets him enormous ridicule at work – he’s actually a helicopter pilot in the RAF, and apparently calling yourself a Fighter Pilot is a really big no-no, but I’m afraid the blog name will stick … partly because of the uproar I know it still causes!).  The Fighter Pilot, as you’d expect from a RAF pilot, is a typical boy, and so when I suggested the day trip, he jumped at the chance.

Whilst it wasn’t a ‘date’, it was great to get a guy’s perspective on the exhibit, and on the exhibition as a whole for date purposes.

As I’m sure you can imagine, a building full of incredible vehicles was a big success!  And as a Bond fan myself, I loved it too.

The exhibition wasn’t just vehicles – the top gallery is filled with story boards and sketches, so you can see how they orchestrated some of the famous actions scenes.  There were also props like passports and ID cards, highlighting the way every minute detail is thought about by props teams.  The entire basement of the museum is filled with around 30 to 40 vehicles – from crazy little microlight gliders, and cars with fins, to the famous tuk tuk used in Octopussy.

From a dating perspective, I think it’s a great idea, because it was a really low key venue.  There was so much interesting stuff to look at, that the Fighter Pilot and I were surrounded by ice-breakers.  Even in quieter moments, you can just watch clips from the films, which are playing behind the vehicles.  It was so interesting to see props and vehicles from iconic moments of films I’d watched as a child, there in real life, and fascinating to read the back-stories behind the vehicles. 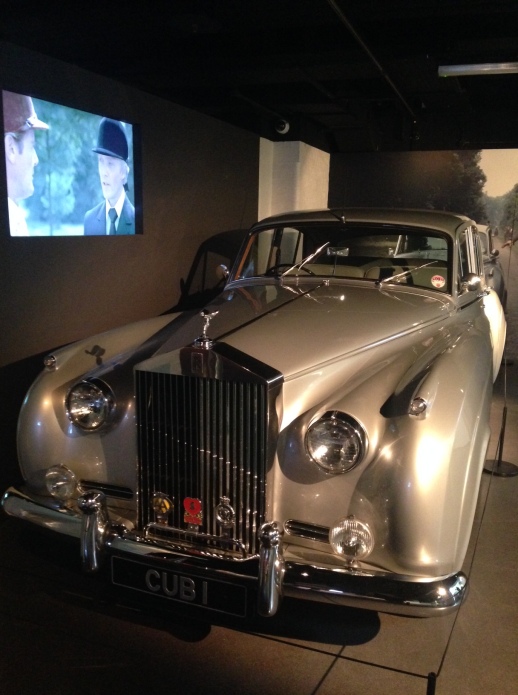 For instance – the Rolls Royce used in A View to A Kill actually belonged to the producer, Cubby Broccoli, and apparently the actor driving it in the film was really worried about scratching it, because the plot required him to drive the huge car through narrow equestrian gates.

Not all the cars at the exhibition are in one piece – for example the car from A View to A Kill had it’s room removed by a barrier.  If you do go to the Exhibition, I highly recommend buying the Guide Book.  Not only does it double as a coffee table book – it’s full of beautiful stills from the film – it’s also packed with facts about each vehicle.  For example, the topless car was actually one of three used in the film.  They had three different cars, in three different states of disrepair.

The Fighter Pilot seemed impressed by the models of helicopters on display – several of which were scaled down versions made by 3D printers.  And we both enjoyed getting dressed up in black tie (over our clothes!) to have our very own Bond photos taken!

If you’re looking for a different date in London, and you’re a Bond fan, I would definitely recommend this.  (As long as the girl going is a Bond fan too!)  It was really low key and interesting, and tickets were pretty reasonable at £14.50 each.  I wouldn’t leave much more than an hour to go around the museum, but it would make for a nice ice breaker at the start of a date, and then I’d suggest going for a drink or dinner in Covent Garden afterwards.