So this week I am dog-sitting! Gunter the Sausage Dog has become the first male to share my king-sized bed with me in the new flat. Yes, I know that’s slightly depressing … but at least he’s more than happy to snuggle! (Though in reality, when I say ‘share’, what I actually mean is 4/5ths of the bed is currently his!)

While Gunter’s owners are off on holiday, Gunter is helping me work out if I can fit a puppy into my rather hectic life full-time (something I’ve wanted to do for years, but that’s only now a possibility, as I’m working freelance from home).  However there’s also another question, which my trusted sidekick is helping me answer this week …

Do dogs help you pull?

It’s a well-known cliché – a guy borrowing a dog (or a child!) and taking him to a park, so that women swarm him.  But does the same work for a single girl?

I’ve been taking Gunter out on Clapham Common to find out!

The first thing I noticed was that Gunter gets attention wherever we go.  Everyone seems to love sausage dogs – people were literally pointing out of cafe windows at him, and he helped stop traffic on several occasions!  His shuffley walk is rather funny (there’s an accompanying noise), so it catches peoples’ attention, and they can’t help but beam at him. 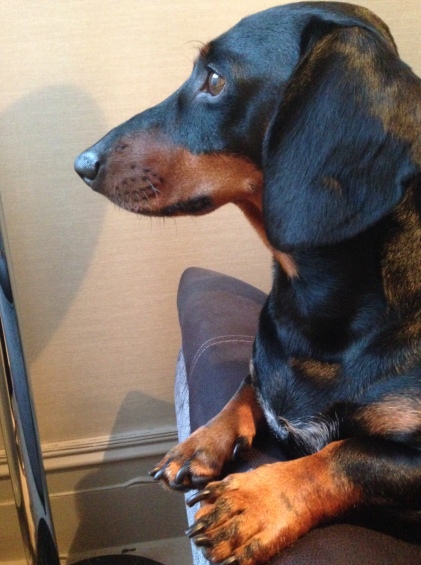 The thing was, most people beaming at him were female.  When women looked down at him, they would smile at him, and then smile at me.  It’s something I know I do too … if I walk past a cute dog or baby, I’ll grin at it, then smile at the owner / parent … I guess to show my approval in a way???

Meanwhile, most guys walking past remained stone-faced.  Or, if Gunter caught their attention, they would glance down at him, but not make eye-contact with me.  Admittedly, because I was about to walk/ run around Clapham Common, I wasn’t exactly dressed provocatively.  Gunter seems to want to lick everything I wear, and so the most practical attire has been gym gear.  Completely functional for dog walking, but not exactly my Sunday best!

Something I realised in busier areas of town, is just how few Londoners actually look down.  It’s interesting, because I thought the experiment might make more people look me in the eye (which it did, with girls and women on less busy streets).  But in crowded, commuter zones, no one even noticed Gunter.  In fact people almost tripped over him, because they weren’t looking down at the ground, they were just looking for the spaces between other people.

Finally, the real test – Clapham Common.  A beautiful park, which I’ve been meaning to jog around since I moved to London … but never really found the time! 😉

So far I’ve been on three treks around the Common, and I think if you’re going to try to pull whilst dog-walking, you have to be rather tactical.  I’m attracted to career-driven, successful men … which means it’s highly unlikely that they’ll be running around a park / walking their dog, at midday on a weekday.  Which for me is the best time to walk Gunter!  Slight fail there.

I did come across lots of mums with pushchairs, school children having PE lessons, and youths playing basketball.  All very interesting for Gunter … not so interesting for me!

So what have I learned about using a dog to attract strangers?

1) It works far better if you’re a guy

3) You need to plan the walks around your ‘target audience’, rather than your own life!

4) That that’s all too much fuss for me, and I’ll stick to taking Gunter out in my pjs and glasses, and avoiding all eye contact! 😉

(You think I’m joking … the only hot guy I’ve seen so far, whilst with G, was outside my house, at 7am this morning, when I nipped out of bed to take Gunter to the loo!  He actually laughed at me!)

2 Comments on A Girl’s Best Wingman?