Yes, those ARE insects on the ice cream!

I’ve done a lot of crazy things in the name of 30 Dates – from climbing the O2 dressed as Santa, to speed dating without saying a word, to smelling other peoples’ dirty laundry.  And so when Hot Buzz asked if I wanted to attend the launch of their exotic new pop-up adventure, of course I said yes!

The Hot Buzz launch was held after hours at Blighty Coffee, a quirky artisan coffee house in Finsbury Park  The coffee shop is also home of the Clementine Club – a work spot for freelancers which I’ll certainly be trying out now that I’m a full time blogger!

We were greeted with a glass of bubbly, before heading upstairs to eagerly check out the menu for the evening –

Snail and mushroom dim sum with a sesame salad

Garlic and lime cricket tacos with avocado and tomato salsas

The only time I’ve ever consciously eaten insects was when I was 16, backpacking in Venezuela.  We ate some kind of ant on one of the expeditions I went on, purely because it tastes like mint and our guide wanted to show us.  I’ve never been particularly squeamish, and I’ll eat most things, but I have to admit, the idea of three courses of insects was rather intimidating at first!

However, as I realised quickly, despite the novelty of the insect ingredients, the food just tasted like normal food!

Each course eased us into the experience.  Our first course – snail and mushroom dim sum – simply looked like any kind of dumpling, with the snails hidden away in the casing.  We would never have even known we were eating snails, and the dumplings were great. 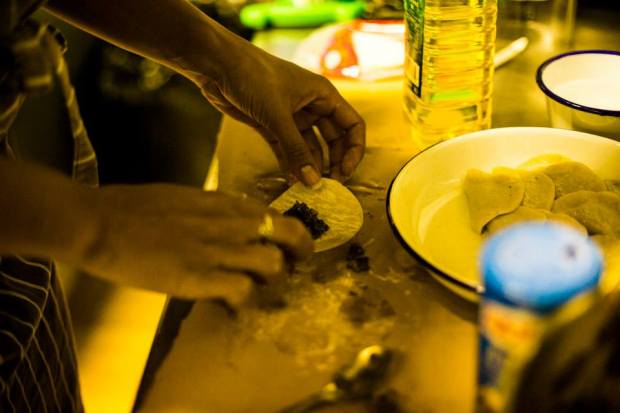 Next up it was time for the Garlic and Lime Cricket Tacos.  Again, if you simply ate the tacos, you wouldn’t have even realised you were eating insects.  However, so as to appreciate the novelty of the experience, we made up our own tacos, so it was up to you how many of the carefully flavoured insects you spooned into your dinner.

My friend and I encouraged each other to try the crickets on their own, and all they really tasted of was the garlic seasoning – which was great.  They are oddly soft and crunchy at the same time, and it’s hard to describe a food that they have a similar texture to, but in the tacos they honestly tasted great, and both of us had seconds! (Oh yeah … did I mention they’re also high protein, low calorie and sustainable??? Guilt free dinner!)

Finally, we tucked into dessert.  This was the most obviously insect-based, with sugars locusts sitting on top of the honey comb and ice-cream.

To be honest, they just tasted like sugared popcorn!  And the grossest part was the odd fresh honeycomb, which is weirdly like eating a candle!  But it did look beautiful on the plate, and really set off the locusts! 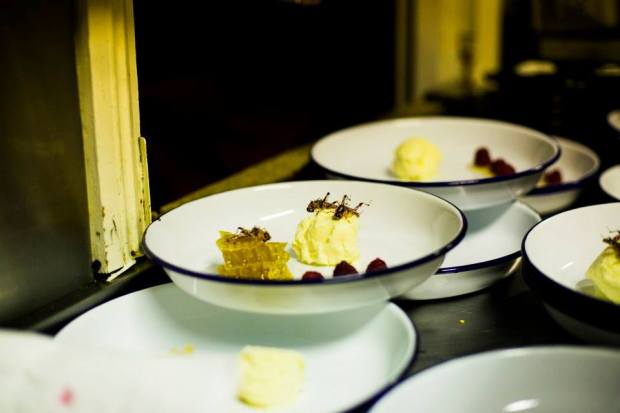 Tickets for Hot Buzz cost £25 per person and it was genuinely one of the best pop-up dining events I’ve been to this year.  The next Hot Buzz event is a Halloween Special at Blighty Coffee on November 1st, though I’ve been assured the food is not designed to scare.

Whilst, like most pop-up affairs, this is a communal dining experience, I would honestly recommend it as a fun date idea, though probably a second or third date as opposed to a first one.  It’s a pretty adventurous date idea, and so I wouldn’t launch it on a complete stranger, but the crazy dinner experience provides heaps to talk about, and is certainly a bonding experience!