Last night I did something I try not to do very often … I googled myself!

Intrigued by which of my projects appear when you enter my name in Google, I flicked through the various web pages, and came across something I had never seen before.  A rather surprising and scathing attack from someone on the other side of the world.  Someone well-reknowned in the world of dating.

Evan Marc Katz is an American dating coach.  A former JDate staff member, he’s been in the dating world a long time.  These days he gives advice specifically to women.  It’s quite different to the stuff I do and write, and I’ll admit I’ve not spent much time reading or watching anything he’s done, but I remember finding his TED talk on Dating earlier in the year interesting and fun.  Interestingly, his name came up in a brainstorm I was doing earlier this week for my new job role.  In January I’ve accepted the role of Global Head of Dating for Time Out (eek! yes, very excited about it! more on that soon!!!), and had been brainstorming American dating experts to use on that side of the pond!!! Evidently I won’t be using this particular one any more …!!!

I’ve never met Evan Marc, or had any contact with him … so it was something of a surprise to find my name negatively discussed in an article by him on his blog.

Back in October I wrote an article for the Huffington Post about stereotypical dating advice which isn’t actually that helpful.  I took things people tell you about dating, and spun them around, to look at some of the reasons those ideas don’t necessarily work.  As with everything I write about dating, it was simply an opinion, and I tried to be as non-patronising as possible.  I believe one of the reasons 30 Dates has earned its place in the dating world, is because I never overtly tell people what they have to do, and because I’ve been there and done that.  Often I’m laughing at myself in the process of working out the best way to approach something!  I’m (just about still!) a single girl, and have been single for the last 3 years.  I’ve dated on more websites and apps than I can remember, and in the last two years have met thousands of singletons who’ve shared their dating experience with me.

I know how my writing is generally received, particularly by other people who work in the dating industry.  I’ve been called upon by countless dating websites, newspapers, radio stations and other companies to share my expertise and experiences, and have consulted for some of the biggest names in the UK dating industry.  Interestingly, the Huffington Post article in question was one which a number of British experts had praised or shared themselves.  All three comments written directly on it were positive ones, agreeing with what I said. So why was Evan Marc so opposed to it?!

For starters, here’s the article under discussion!

I personally thought it was helpful and pretty inoffensive!  Apparently not … here’s Evan Marc’s response!  I would like to point out, Evan Marc didn’t in any way share this article with me, contact me with his disagreement, or even comment on the HuffPo article directly – which I think is a bit spineless and underhand.  If you’re going to write a response to something, at least have the decency to let the person you’re attacking know about it!  Especially when your own article appears to begin with a rather personal attack!

In response, I will tweet Evan Marc a link to this article.  I don’t plan to start a war of words, but I do wish to respond directly to a couple of things he says.  Because we all have a right to our own opinion, and to free speech, and I feel the way I’ve been portrayed on his blog is pretty harsh and under-researched. 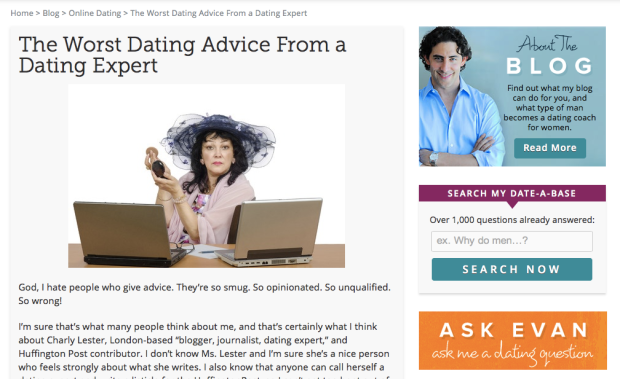 1) The choice of photo suggests I’m a clueless granny, sitting pretty doing my make-up, disinterested in what I’m writing about.  I live what I write – that’s how this whole blog started.  The reason I’m so invested in dating is because I’ve been single for 3 years and I’ve lived the ups and downs, and want to help save others some of the dramas!  I’m 31, not 51!  And a normal girl!!

2) “God, I hate people who give advice. They’re so smug. So opinionated. So unqualified. So wrong! I’m sure that’s what many people think about me, and that’s certainly what I think about Charly Lester, London-based “blogger, journalist, dating expert,” and Huffington Post contributor”

I’ve never been accused of being smug on this blog.  The whole point is it’s designed not to be patronising.  If anything the post in question was designed to tell people not to worry so much!  The advice was telling them things like ‘you don’t need to lose weight to attract someone’ and ‘you shouldn’t have to stress over your dating profile too much’.  How is that smug advice?? As for opinionated … As I often say on this blog, we’re all entitled to our own opinions, and you’ll never get a situation where everyone agrees … but I can’t help feeling this introduction is a pretty personal attack … and a rather unnecessary one given the nature of what was being discussed.  “So unqualified …”  Evan Marc, I’ve spent more time talking, writing about, and most importantly DATING in the last two years than anything else.  I set up a national Awards scheme, judged over 200 applications across the entire industry and managed to bring an entire industry together in one room.  And possibly most importantly … unlike you, because you’re happily married, I’ve actually been dating first-hand in 2014.  I’ve actually online dated in a world of Tinder …. How does that make me less qualified than a married man who has only dated vicariously in recent years?!  Like I said, I’m not here to start a war of words, but I do find it rather patronising for someone who is happily married to tell me as a singleton that I don’t understand dating or online dating.  I do – I’ve lived and breathed it, and have had a lot of time to work out what does work, and what doesn’t!!!

3) Put A Lot of Time Into Your Online Dating Profile

I stand by this opinion.  If your profile is too lengthy, it will put people off.  And there is no point writing your life story on a dating profile, or creating something so cultivated that you lose the sense of you.  Evan Marc – in 2014, yes there are people who read every word of a profile.  But a LOT of people just skim read and glance at the main stuff.  That’s not saying they’re bad people or not worthy matches, that’s just how we function in 2014.  We have lots of other media going on.

Evan Marc – you’ve really misread this one! I was talking about people being told they should lose weight or improve their appearances to date!  Did you even read the explanations beneath the headers?!

5) Get To Know Someone First

Again this advice was clearly qualified.  I’ve fallen foul of this one before – talking to someone too long before meeting and then being really disappointed because they didn’t end up being the exact same person I imagined.  Getting my hopes up too soon because I felt like I really knew someone before we even met.  Only agreeing to go on dates with guys who I felt I had a real connection … only to realise the guys I had most connection with in real life were ones I would have probably dismissed online.

Dating is about going out, meeting new people and learning about yourself.  By the sounds of things, Evan Marc’s advice is about husband-bagging.  A recent video was entitled ‘How to Make the Most Attractive Men Fall for you Every Time’.

And that I think highlights the issue Evan Marc has with my article.  We come at dating from completely different angles.  I don’t profess to be a dating coach or a relationship expert.  I know about dating.  That’s my area of expertise.  How to approach dating.  How to have a fun date.  How to get confidence about dating.  How to learn from dating.  How to embrace being single.  I’ve never tried to tell people how to find a husband.  And frankly I find telling people to act a certain way to attract men pretty offensive and old-fashioned!  Particularly when it’s stressed as ‘the Most attractive men.”  But some people want to hear those things.  Some people want to spend their money being told exactly how to attract a husband – something EMK has clearly tapped into well – by the looks of his website he has quite an empire!  Each to his own and all that …

Sorry Evan Marc, looks like we’re going to have to agree to disagree on this one …

What I will say though, is next time you start making personal attacks though, it’s good form to at least make the other party aware!