In preparation for Saturday, Bookatable invited me and The Rugby Boy to Yaneff at DSTRKT to try out their special Valentine’s creation – the Ultimate Valentine’s Aphrodisiac Menu!

I have to admit, I was slightly apprehensive.  I’ve never been to DSTRKT before, but have only ever thought of it as a nightclub, and so I wasn’t expecting wonders when RB and I arrived at dinner last night.  However, my fears were quickly proven wrong … so wrong in fact, that I was blown away by the four (and a half) course meal and cocktail!

All the ingredients were specially chosen for the aphrodisiac properties, and the menu carefully explained what each dish was made of, and why.

First up was the champagne cocktail, always a good start to a meal! It was quickly followed by an amuse bouche – Oyster Popcorn – which was incredible, and a far less slimy way to enjoy the most infamous aphrodisiac.  The first official course was Valentine’s Guacamole, served in an adorable pig-shaped bowl.  Both the Rugby Boy and I agreed that it was some of the best guacamole we’ve ever tasted (ironic considering
we had a date at a Mexican restaurant just last week, and it was incomparable!). 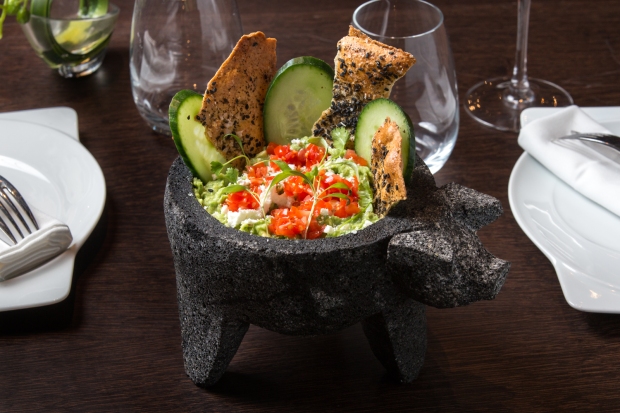 The second course was the one I was most dubious about.  Salmon & Passion Fruit Tartare with Quail’s Egg Yolk, Coriander, Blood Orange and Salmon Roe.  It was genuinely incredible.  And we were still on the second starter! An extra cool touch … it came presented in a smoke-filled glass cover, which took two waiters to deliver!

And then it was time for the main course.  I was stuffed already, but managed a decent amount of the perfectly cooked tenderloin.  Interestingly, I should point out that whilst Bookatable had sent me to do the review, the restaurant staff had no clue I was there doing a review (so much so, that when we left without paying, someone chased me out of the restaurant!).  Which meant a lot to me, as the service all night was impeccable, and it was really good to know we weren’t just getting special treatment, or particularly good food, because they knew I was a blogger.

Finally – dessert.  The first time either the Rugby Boy or I had eaten caviar … and the combination with the chocolate was bizarre, but really clever.  The salty taste of the caviar really cut through the rich chocolate of the mouse and truffles.

It was genuinely one of the best meals I’ve ever had, and I was so surprised to eat such a tasty, innovative meal in a nightclub!  The setting was actually really cool, and the decor is different and modern.  I would definitely go back again to eat.

The Valentine’s menu is £49 a head, which I genuinely think is a bargain for what we ate, and the overall standard of every course.

Well thought out menu, with great food.  I enjoyed the luxury of champagne and cavier, and it’s a great shout if you’re trying to impress someone.  Very cool restaurant, very friendly staff.  It was quiet on a Wednesday night, but I think the atmosphere would be great when every table is full.  Tenderloin in particular was very well cooked.  Excellent value for money.