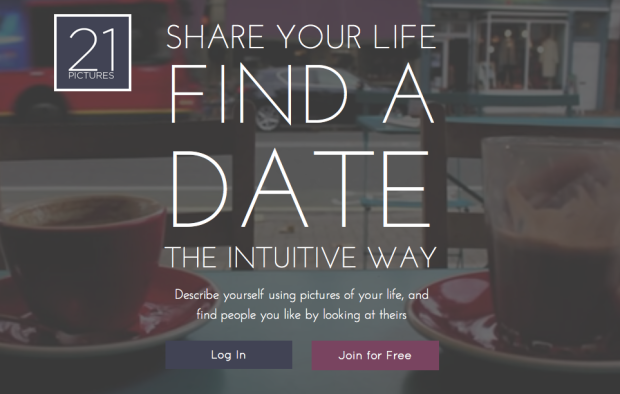 Around six months ago, I met Michael Bond, a science writer who specialises in psychology and human behaviour.  A former senior editor of the New Scientist magazine, Michale had decided to move into the world of online dating, with the photo-based dating site 21 Pictures.  A few months on and the site is reality!

21 Pictures launched while I was in Australia, and I’ve only just had a chance to demo it.  (Don’t worry, I sat building my profile with the Rugby Boy at my side, and Michael has kindly agreed to delete it after I’d checked out the website)

For a start, I love the concept.  When it comes to online dating, photos are the most powerful part of a profile.  And it’s certainly true that a photo speaks a thousand words.  I’ve always said that when it comes to dating photos, you need to think carefully about what your profile photos say about you.  Who is in the photo?  Where are you?  What clothes are you wearing?  Are you doing an activity?

By using 21 pictures, you’re able to say so much more about yourself.  You can showcase aspects of your personality, and use your dating profile more like a Pintrest board, something which lesbian app Dattch pioneered last year.  Pictures don’t need to all be of you – you can upload landscape shots, snaps of things or people which mean a lot to you, and you can even use the website’s software to tweak your own pictures – similar to Instagram.  Other people on the site can also ‘like’ and ‘comment’ on your photos – in a similar way to Facebook and Instagram.

Pictures can be uploaded via Facebook or Instagram, or directly to the site, and you don’t actually have to upload 21, though it’s recommended.  In order to look at other profiles, you must have uploaded a minimum of 5 pictures.

As well as uploading photos, the site asks you 21 questions.  These cover all aspects of your personality – addressing things like how outgoing and OCD you are, and also asking you to consider how important certain things in a relationship are to you.

Once you’ve answered the questions, and uploaded at least 5 pictures, the website then presents you with 21 suggested matches.  (Yes, there’s a theme building!)

The idea of the limited matches is to combat the effect too much choice can have.  Research shows that when faced with an endless selection of potential dates, people make superficial comparative judgments, rather than focusing on the individual qualities which may be staring them in the face.

Users can change the 21 matches, but are only allowed to make 3 changes a day, limiting the number of profiles you can read.  Matches are based on the 21 questions answered when you first log on to the site.

Personally, I love the design of the site.  I think the key to making a good online dating site is making it feel like social media – it’s a great way of removing any stigma related to online dating, and it makes the site feel modern and contemporary.  I love the combination of features taken from Facebook and Instagram, and the language of the site was laid back, friendly and fun.

It was a little glitchy at times.  It only loaded my most recent Facebook uploads, which may not be pictures you want to appear on a dating site.  And when I refreshed these options, it only showed me a very limited selection at a time.  I found it hard to upload pictures directly from my computer, and the site struggled to upload multiple pictures at one time.

However, the layour of the site is great – I love the way you can play around with the picture sizes, shapes and layout on your profile page, so that you can really personalise it, and it’s refreshing to not have to write a lengthy profile.  The 21 questions at the start of the log-in process were fun, and interesting to answer, but not too lengthy that I got bored.

The site is currently free, but won’t be for long, so if you’re interested in trying something new … get involved now!