If you check out Twitter today, the internet is praising AskMen.com for shifting the way it rates women.  Instead of their traditional annual ‘Desirable Women’ countdown, the online magazine has run a ‘Top 99 Outstanding Women‘.

Whilst I wouldn’t call myself a feminist – I would certainly call myself someone who believes in equality.  And so when I initially saw this post, I was really excited. Finally, could women be viewed for something other than their looks?

Well sort of … but is the list of 99 women really the most ‘Outstanding’ women in the world?

In my opinion, if we are labelling a woman ‘outstanding’ she needs to be a role model.  Someone who parents teach their daughters about, for all the right reasons.  Women who other women aspire to be.

Hmm … well that describes at least some of the 99 women in the AskMen.com list. 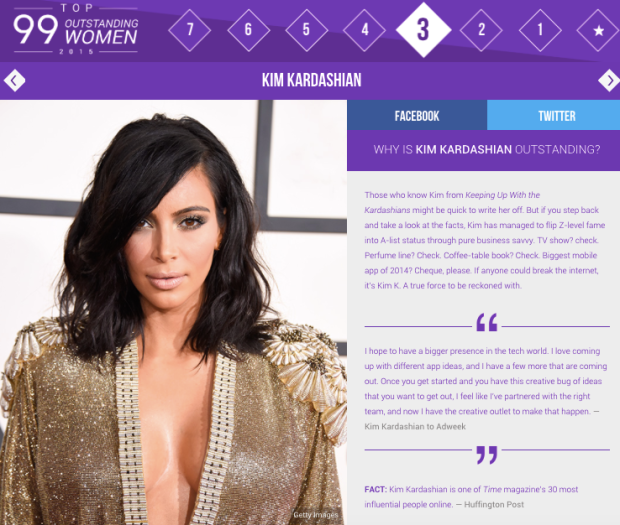 My biggest bugbear with the list has to be Number 3 – Kim Kardashian – who also scored GQ’s ‘Woman of the Year Award’.  This is a mother who tried to ‘break the internet’ with naked photos of herself!  I’m sorry, what??? Kardashian rose to fame because her dad represented OJ Simpson in his murder trial, and then she made a sex tape.  Yes, she’s made a sh*t load of money along the way … but I don’t respect her.  And I know very few mothers who would cite Kardashian as a role model to their children.

And don’t even get me started on Kendall Jenner – praised for being a model.  Again, not really a role model many parents would present their children with, and interestingly, one whose rise to success has largely been due to her family’s fame and power. 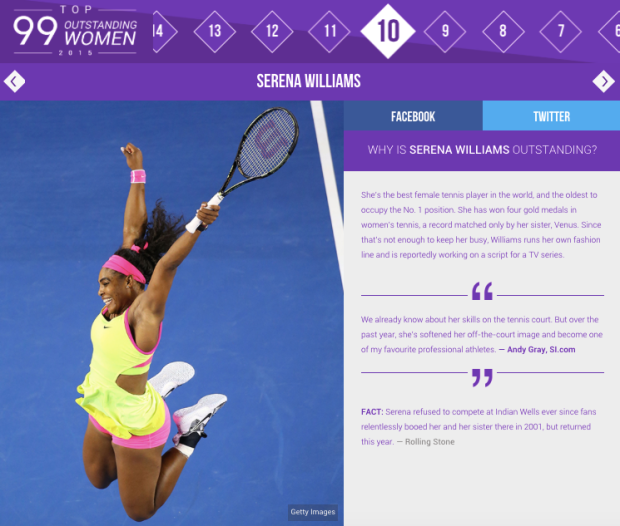 Likewise, whilst I respect both Venus Williams and Lindsay Vohn – incredible sportswomen, who have rivalled and defeated their male counterparts in the record books, the fact both were beaten by a UFC fighter – Ronda Roussey bemuses me.  This is a woman famous for knocking out another human being in 14 seconds.  How is that an achievement which rates her above humanitarians and businesswomen?

The Top 99 is far too heavy with actresses. Yes, some have achieved incredible things, and some are multi-talented – Amy Poehler and Tina Fay have earned their stripes in my opinion, though Tina Fay appears bizarrely low.  But others seem mainly chosen by their looks.

Amusingly, Game of Throne’s actress Emilia Clarke’s tribute suggests she’s slipped dramatically, because she is at #78, despite having appeared at number 1 in last year’s Most Desirable Women poll … but isn’t the whole point that this chart is about completely different things.

There are some very noticeable absences from the chart.  It appears to be an American list, though a Brit – Emma Watson is (very rightly) number 1.  However both Hilary Clinton and Condoleeza Rice are missing from the chart.  Interestingly Chelsea Clinton appears.

And whilst Amal Clooney may well deserve her place at number 8 for her work as a top barrister, I can’t help disliking the fact that the world only knows her name because she married George Clooney (after all of five minutes).

Yes, it’s great to see a chart celebrating Outstanding Women … but it would be even better to see a chart where all 99 women are completely deserving of the title, and in their own merits.

We’ll get there one day!