In the four months since I first started this blog, there have been a number of ‘pinch me’ moments!

That first day, sitting at my desk at work and watching friend after friend catch on to my crazy challenge status on Facebook.

The minutes before my first Date with the Normal Fish – getting ready with hundreds of people making decisions for me on Twitter and Facebook.

Staring across at Madonna at Limbo with The Fake Pimpernel.

Sitting in a taxi with The Enigma realising he had conjured my perfect date!

Drunkenly kissing  The Fresh Prince in the middle of the afternoon in Mayfair.

Coming off the phone after an hour and a half-long apology from The Henley Boy.

Finding myself on a Date at The Ivy with the Superhero Alter-Ego.

Sitting at Chateau Marmont, chatting with The Actress and The Producer about how my blog could be turned into a film.

Meeting up with the Guardian Soulmates team on my return to England and being asked to be a Guest Speaker at one of their Singles Events!

And this weekend was no different.

The Dating website DoingSomething had asked me to go to Thorpe Park to review whether a theme park makes for a good first date!

Now, in hindsight, standing in the cold for hours probably wasn’t the best idea when I was nursing the flu!  Flu which rather depressingly stopped me from attending the Love & Lust London Halloween Party last Thursday might I add!  Still sulking, having heard all the amazing tales from the three Experimental Daters who went – Miss 32, The Rebound Gal and The Champagne Hero – I was keen for some fun.  And after being stood up by my first ever #WednesdayDatingClub date last week, I figured I couldn’t cancel on the lovely gent who had agreed to accompany me to Thorpe Park.

So I braved the cold in the name of Dating! (I say braved, as if going on roller coasters was a chore!!)

I remember discussing theme parks as date venues back on my first date with The Enigma.

The Enigma had put in his research to score the perfect 10/10 on our date.  For weeks he’d consulted with female friends, trialling ideas from Time Out and making numerous suggestions which they knocked back.  One of his first ideas, which didn’t pass the ‘female friend test’ was a ‘Rollercoaster Date’.

Who would have known that just a few months after my amazing first evening with The Enigma, a Dating Website would be sending me to Thorpe Park to review a Rollercoaster Date?!

I figured the Theme Park Date idea would tie in well with the Fear Experiment.  Aside from horror movies (something I’ve never been a fan of), theme parks are one of the safest way to scare yourself!

And what better time to head to a Theme Park than during Halloween Week, when Thorpe Park becomes the home of ‘Fright Nights’?!

Now, I have to admit to having been on a Theme Park date before.  In fact, prior to starting the 30 Dates Challenge, it was probably the date I would have cited as my ‘best ever date,’ for a combination of reasons.  It wasn’t a blind date, and was with a friend who I had fancied for years, and who I had been internationally flirting with for several weeks before we met up!  Geographical reasons meant we’d had to wait weeks to meet up, and so the suspense of it all made the date incredible – plus the sunshine and awesome rides!

But that hadn’t been a real ‘first date’ as we’d known each other for years, and we’d been at Alton Towers rather than Thorpe Park.

So how did Thorpe Park fare as a First Date location?  And how did the FEAR factor into our date? 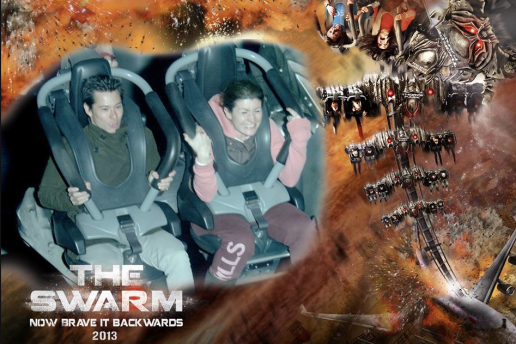 I’d been a little apprehensive about the weather.  It had been drizzling for most of the morning (we’d agreed to meet at 4pm as the park was open until 10), and as I extricated myself from the duvets I’d spent the past 72 hours lying under, I realised I wasn’t going to be able to wear my usual dating uniform (polka dot summer dress and ballet pumps!)

I opted for a far more sensible combo of tracky bums, a zip-front Jack Wills hoodie and a gillet – rah girl casual chic.  Yes I looked like I was planning on spending the day bumming around on the sofa, rather than on a first date, but seeing as that was how I’d spent more of the past three days, I wasn’t far off!

I plastered on some make-up to hide the damage of three days of sleepless nights, and arrived at Thorpe Park with a grin on my face.  We were in luck – DoingSomething had not only treated us to tickets to Thorpe Park, but also queue jump to all the most popular rides.

The website is famed for trying to inject FUN into dating (something you’ll have realised is very close to my heart!) and they certainly managed to hit the right note with our date.

As a Saturday afternoon, in half-term, with the added draw of Fright Nights, the theme park was surprisingly busy considering how cold and wet it was outside.  So the queue jump passes were amazing.

The Fright Night idea works well now that the clocks have gone back.  The park’s most popular rides are lit with coloured lights, and carry on running long after it’s gone dark.

In a way I found the darkened rides less scary.  For me, the biggest fear is heights, so if I can’t see how high up I am, it’s a bonus and I can just enjoy the twists and turns of the ride.

To be honest, I wouldn’t recommend a theme park for a first date, just because of the wait time.  You need good conversation in the queues when you’re just one on one.  Normally I would go to a park with a big group of mates, so the conversation flows more easily.  But as a pair, you need to constantly chat.

In that respect, it’s a great date if you know you get on well and want to spend time with a date in a fun setting – but I would probably suggest it for Date 3 onwards.

It also works well if you fancy your date, as there are lots of opportunities to play on your fear and get closer – whether you hold their hand on the ride, huddle close in fear, or full on grab them in the middle of a horror maze!

The Horror Mazes are the unique aspects of the Fright Nights – scary movie-inpired mazes where costumed actors jump out at you from dark corners and meat-locker like passages.

We opted for the Saw Maze – creeping through the passageways as demented patients and tortured hostages leapt out at us from the dark.  The touched us, breathed down our necks and screamed in our faces.

I tried to scream, but the flu had taken most of my voice (leaving me with a rather entertaining sex-line-like warble!)  So instead, I just gripped tightly onto my Date’s shoulders (he went first thankfully!) and hoped the actors attacked him not me!  (Not something you say often on a first date!)

My date was the picture of chivalry.  When I told him I was scared about going on Stealth he admitted he was scared too, and asked if that helped.  Weirdly it did!  We played on the fairground-like stalls for far too long, just so he could win me a (rather adorable) fluffy turtle toy!  He bought me hot chocolate when I was shivering, and insisted on letting me pick what order we went on the rides in.

My favourite was Nemesis Inferno.  Compared to some of the scarier rides (SAW – The Ride, Stealth and Swarm), it was just a really fun ride, with very little fear element.  We actually laughed as we went on it, chuckling to ourselves, and chatting away as the rollercoaster looped and yawed!

The cool thing about (self-induced) fear is the rush afterwards.  That euphoria when you realise the rollercoaster hasn’t come off its rails and your belt remained fixed firmly around you the entire time, and despite the crazy gravity-defying positions you found yourself in, you’re still alive!  Carpe Diem!

And that survivor’s rush is pretty darn amazing.  Which can add a rather cool buzz to a date if there’s already a spark!

A theme park date is always guaranteed to be a long date – as you’ll want to make the most of your ticket – which is why, again, I’d avoid it if you don’t already know you fancy your date!  But because of the length of the date, it offers itself as a really good opportunity to get to know someone, and to lay foundations for a relationship – whether that relationship ends up being a friendship, just short-term, or something more serious.  As the day progresses, so too does the sense of shared-experience (and I guess shared-survival!), and so it’s easy to find yourself getting considerably closer to a date in a short space of time.

And that, for me, is what the best dates tend to consist of.  An experience where you feel like you get closer to someone.  Where you develop shared experiences, and shared jokes.

I didn’t fancy my Theme Park date, but I did make a friend that day.  And the date is definitely one I remember.

Would I recommend a Theme Park date?

Hell yeah!  Fear can definitely add to a date (if sought in the right ways!).

Would I recommend it for a first date? No, not so much!  Save it til the third … It’s not only a long date, where you need to talk a lot, but it can also be an expensive one, so make sure your date is worth it!

If you can afford to, I’d definitely recommend investing in queue-jump.  And, also, make the most of two-for-one offers as you’ll always have an even number on a date!

So thanks DoingSomething for sending me on that date!  Happy to take on whatever Date you’d like me to go on next! 🙂