Now I know a lot of you have been waiting with bated breath for The One With The Sign’s first blog post!  When I posted his Experimental Dater Profile – complete with a photo he’d had a friend take on the train that afternoon!- I received a number of Tweets and emails about him, and a lot of you have also been hassling me about his first post.  Well here it is!

Still poorly with the flu that stopped me enjoying the Love & Lust Halloween Ball last week, I was unable to head to Dalston on Monday for DoingSomething’s launch of Yoga Pub Dating.  Sounds crazy, right?  But remember, this is the dating company who introduced singletons to the London Toilet Tour, and played ping pong on the roof of the O2 this summer!

Knowing TOWTS is a fan of yoga (he once attended a yoga rave!), I asked if he would mind standing in for me and reviewing the event, and he didn’t disappoint – even appearing in the article in Metro on Wednesday as a result! (And yes, as Miss 32 asked me to point out, TOWTS is the one on the far right, camping it up in his pyjamas!)

It’s a Monday night and I’m standing at a bar in Dalston making small talk with an attractive blonde woman.

Nothing too out of the ordinary there, except I’m wearing what can best be described as slightly-too-small pyjamas, there’s a man standing next to me doing a tree pose and a photographer in a trilby hat has just asked me to get up onto the bar and do an upward facing dog while pretending to order a drink.

When Miss29 asked if I’d like to be a part of the next stage of her blog as one of the 30 Experimental Daters, I pretty much jumped at the chance, knowing that it would probably lead to some interesting stories along the way.

Hence why I find myself in a room with 19 other single people about to take part in something most of us had probably never done before. After getting changed and posing for a few pictures to promote the event, we make our way to a room housing an art exhibition, which tonight is doubling as a yoga studio. 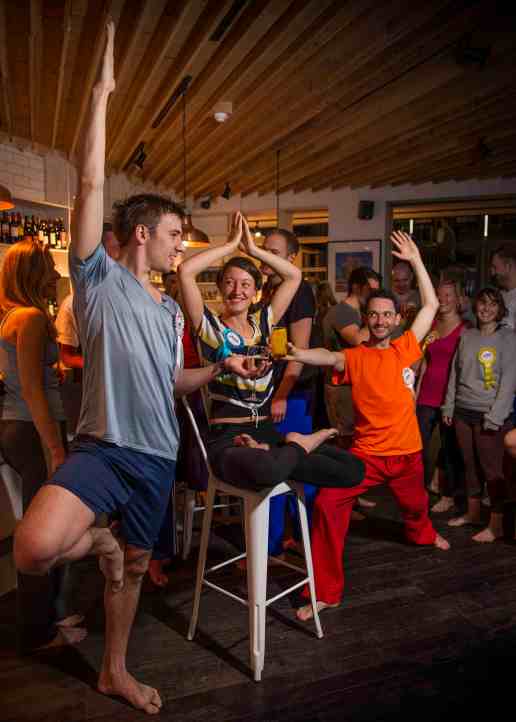 Richard, our instructor, asks us to go around the room introducing ourselves and saying one word to describe how we felt – mine was “relaxed” – before we start the class with some simple warm up exercises.

Having broken the ice, we’re soon paired up and shown how to do partner poses with members of the opposite sex. Cue some nervous laughter followed by a lot of writhing about trying to get into position. It feels a little bit like a really big game of twister, except we’re all trying to make a good impression and hoping we get paired with the person we fancy.

Richard keeps the energy up – and the awkwardness at bay – by getting us to swap partners every few minutes. He’s the first Yoga instructor I’ve ever met who regularly uses the expression “Wicked.. Wicked!” during class, which just adds to the fun.

Having done partner poses with a few different people, we’re soon doing more spiritual things to encourage us to connect with each other. Even though everyone in the room is a complete stranger, thanks to Richard’s positive energy it doesn’t feel overly strange to be doing things you’d only normally do with people you’ve known five years, let alone five minutes. 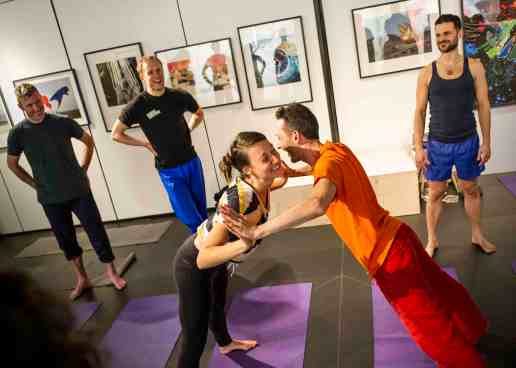 The class ends with ten minutes of meditation, which helps put all of us at ease and eager to talk to each other in the pub afterwards. The change in everybody’s demeanour after class is tangible. People are more relaxed, less awkward around each other and invariably have a shared experience to talk about, which makes it much easier to speak to people you fancy.

Slightly surreal evenings like these are exactly the sort of thing I expected to take part in, and are part of the reason why being single in a great city like London can be so much fun if you’re willing to try something new.

If you’re single, you like Yoga and aren’t afraid to try something a little out of your comfort zone, then Yoga Pub Dating could be just the thing for you. You might not meet someone you fancy, but at least you’ll have worked on your downward dog and you’ll have a story to tell your mates down the pub.

As for the attractive blonde woman from the bar, I don’t kiss and tell…

If you sign up before December 1st, the subscription will also include a free Yoga Pub Dating class!