To some degree, I’ve let the dust settle on this argument, but equally I want to speak my mind, so here goes. 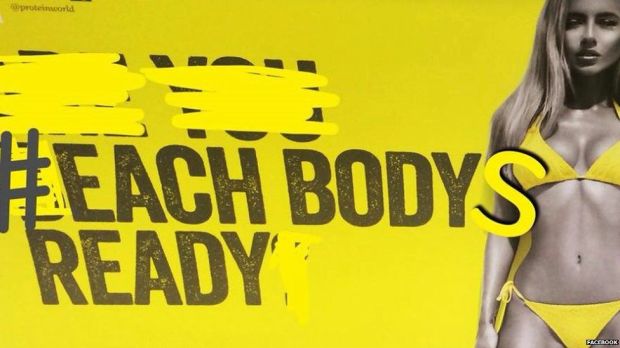 I commute in London every day.  And for a couple of weeks, before the furore erupted, I was faced by the now infamous bright yellow poster, with the enviably slender model in a bikini. I remember looking at it, rolling my eyes and walking on. I wasn’t outraged, because frankly … it’s nothing new.

As a woman, who grew up in the nineties and naughties, every time I’ve looked in a magazine, I’ve been presented with ‘ideals’ for female beauty.  I know what every Z list celebrity going looks like in a bikini, and whether she’s put on weight or lost it recently.  Furthermore … I’m a member of the Facebook generation.  Since I was at uni, I’ve lived with social media in my life.  An odd phenomenon, which means I’ve seen far more of my friends and acquaintances in their beach wear, than I ever would have, ten years ago. 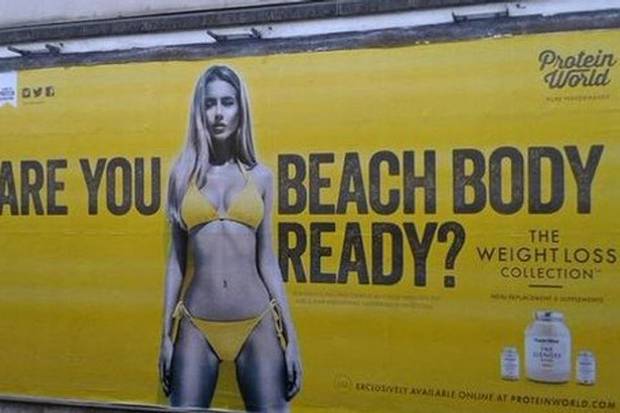 As I’ve watched the commentary following the ads on Twitter and the rest of the internet, there are two defined camps.

Those who support the ads – who for the most part seem to be the young, the slender and those who adore Protein World products.  And those who are against them, who have been labelled all kinds of awful things ‘fatties’, ‘lazy’ etc etc.

Firstly, I’ll just say, I think the Protein World reaction to criticism has been vile.  As has the commentary of a number of the company’s supporters.  I’ve seen vulnerable women attacked on Twitter for having an opinion, and being personally ridiculed by a company with thousands of followers.  It’s NOT good PR.  It’s horrible, and bullying … and has made me despise Protein World far more than the advert did!

The Problems with the Ad

Essentially the problem isn’t just with that advert.  The problem is with our society.  A society which thinks it’s acceptable to show a woman wearing next to nothing on tube carriages. A society where companies promote replacing meals with chemicals to get slim.  A society where we are immune to expressions like ‘beach ready’ and where women’s magazines are packed full of photos of women in their underwear.  We shouldn’t see others in that light!  I don’t want to know what my friends and acquaintances look like under their clothes!  And I shouldn’t have access to know what celebrities look like in their beachwear.  Someone putting on or losing weight is NOT news.

The Problem with Our Views on ‘Healthy’

The argument for Protein World has been that the model represents a healthy, aspirational body and that others are just jealous.  Apparently anyone who doesn’t look like the model is ‘lazy’ or a ‘fatty’.

I’ve run 3 marathons.  I’ve done 42 mile hikes five times in my life.  I’ve climbed to Everest Base Camp, done the Inca Trail, and climbed Kilimanjaro.  I exercise 4 to 5 times a week, and I eat relatively healthily.  I’ve never been hospitalised in my life.  I am ‘healthy’.   No one I know would ever describe me as ‘lazy’.   And at a size 12, I’m under the national average dress size.  But I look nothing like that Protein World model in a bikini.

The problem is that the more we see these kinds of images, the more warped our ideals become.  And those of younger generations.

It’s taken me years to love and appreciate my body.  And part of the reason for that is the way the media portrays beauty.  The fact that the media portrays weight gain as such a negative thing, and weight loss in such a positive light.  The fact that photos in the media are mercilessly photo-shopped.  And yes, I know the Protein World photo isn’t photoshopped – but she’s a fitness model who exercises several times a day and lives on a vegan diet.  That is an EXTREME lifestyle.  It’s not an aspirational one unless you want to be a fitness model.  And ironically, she didn’t get that body by substituting 2 meals a day for the Protein World products.

But they are just the tip of the iceberg.  Our attitudes to body image need to change, and that needs to come from the media.  Photo shopping needs to be banned.  Photos of people in their beachwear should no longer be currency.  It shouldn’t be socially acceptable to put selfies in your underwear on Twitter, and people should save their bikini beach photos for their nearest and dearest, not for every man and his dog on Facebook.

And no …. that doesn’t make me a ‘fatty’.  It makes me a normal, sensible girl, who wants to see her future daughters grow up in a world, where they don’t spend their teenage years obsessing over a figure on scales, or the size on the label in their dresses.

2 Comments on Body Image – THOSE Protein World Ads, and the Wider Issue