When I backpacked around the world, I tended to live by that expression ‘Do something each day which scares you.’

It was the reason I threw myself out of planes and off bridges despite being afraid of heights.  That same phrase took me to unthinkable depths with just a scuba tank strapped to my back.  And was the driving force behind solo mountain climbs, and hitchhiking experiences in countries where I couldn’t speak a word of the local tongue.

Back home, however, I live my days in a relative comfort zone.

Even dating – an act which I know most of my single friends find daunting – has become such a regular part of my social life that at times it can be pretty mundane.  Yes, I find meeting new people interesting, but it’s rare that excitement accompanies a first date.  Rarely, since the original 30 Dates, have I turned up on a date with a guy and not had a clue what to expect.

Regular readers may remember that a couple of weeks ago I took part in a date auction for charity.  As well as being auctioned off myself (more to come on that note next month), I also bought one of the other auction ‘lots’.

And whilst both those reasons did contribute to me bidding for Capt. Charm-Offensive, I also know the reason I bid for him was because he’d had good banter over Facebook in the lead up to the event, and because in person it turned out he was also really rather attractive!

And so, as he stood on top of a table in Chelsea, beyond drunk after hours of Ascot drinking and still wearing a top hat and tails, I raised my hand, placed a bid, and wasn’t overly disappointed when no one bid any higher for the Captain.

To his credit, despite how drunk he was, he was extremely polite on the night.  He came over to thank me for bidding, and messaged me the next day to repeat his thanks.  I had told him about the blog, something I wasn’t overly sure had gone down too well, but when I explained that I go on a fair few dates, and would love to be surprised, he took to the challenge with enthusiasm.

In the weeks which followed he gave me a few instructions about our date.  We were to meet at Notting Hill Tube Station, and I needed to wear trousers, sensible shoes and my smallest handbag.

That may all sound simple enough, but seemingly unknowingly, he’d found my Achilles Heel.

When it comes to dating, I’m a rather girly girl.  And I really enjoy being a girly girl on a first date.  Perhaps because I ‘wear trousers’ in so many other areas of my life!  My first date wardrobe consists of a selection of patterned fifties-style summer dresses – a tradition, a uniform, a comfort-zone.  However none of that armour was conducive to the instructions he’d so carefully laid out.

I realise clothing shouldn’t really matter.  That I’m comfortable in my own skin, and that Miss Twenty-Nine in trousers should be just as good a date as Miss Twenty-Nine in a dress.  And yet, I think I look more attractive in the latter, which in turn makes me feel more confident.  And for once, I was actually going on a date where I cared about whether my date fancied me or not.  A date where I needed to feel as confident as possible.

Captain Charm-Offensive is really rather eligible.

As in so eligible, that I’m not too sure he’d ever have asked me out on a date, if I hadn’t bid for the date.

Which in turn, creates Strike Three.  Because (as he actually pointed out during the date), I started on the back foot, because I had bought him.

Talk about laying your cards on the table!

And so began my first date as a Londoner.  My final date of the first year of 30 Dates (next week marks the year anniversary), and the most intimidating first date I’ve ever been on.

Because for once I was well and truly out of my comfort zone.  Do something each day which scares you.

And so true to form, a few hours before the most intimidating date of the year, I fell flat on my face in the middle of King’s Cross station, ripping the trousers I was so loathe to wear on a first date!  In the hours that followed, to add to the awkwardness, the Guardian team presented me with a lovely bouquet of flowers, which I realised I couldn’t really turn up with to a first date … So I ended up giving a random stranger on the Tube a bunch of flowers, whilst hastily trying to explain why I couldn’t take them!

I arrived at Notting Hill Gate a few minutes after half six.  Captain Charm-Offensive was looking effortlessly attractive in jeans and a t-shirt, and casually holding two motorcycle helmets.

I have never been on a motorcycle in my life.  Mainly because I’ve seen the injuries they can cause.

Do something each day which scares you.

Seeming to sense my fear, Captain C-O gave me a rather adorable child-proof set of instructions for the bike, strapped my helmet on for me, and instructed that I wrap my hands around him wherever I liked.

Do something each day which scares you!

Three days into life as a full-time Londoner, I was whizzing through the streets of Notting Hill, plastered to the back of an incredibly hot guy’s motorcycle, trying my hardest not to dig my nails into his washboard stomach, or to press my chest too suggestively against his back!

As we wound through the crowded bustling roads, on one of the hottest days of the year, I tried to work out where we were going.  I smiled inside my helmet as Capt. C-O directed the bike towards Hyde Park.

A few minutes later, and he was unloading a picnic onto a blanket in the evening sunshine.  Simple, yet effective.

We sipped Prosecco from paper cups,  and picked at olives, salami and smoked salmon, sitting on his old boarding school blanket, and listening to the sounds of the parakeets in the trees.

Possibly the most simple date I’ve been on all year, but also one of the most enjoyable.  There’s something rather telling about laying back on a blanket, looking up at the sky and simply chatting about anything and everything.  It’s incredible both how close and far lying a few inches away from another person on a picnic blanket can seem.

He still didn’t let me inside my comfort zone.  In fact every time I launched into a story, beginning well-rehearsed anecdotes from my life, which in turn can act as a comforter when you’re feeling out of your depth, he would interrupt me with another question.  Even when I challenged him about constantly interrupting, he shrugged, and told me he was interested in what I was saying.  That this was a proper conversation – one where the other person says something which resonates with you and sends you off on another tangent.

After the picnic, we headed to a bar in Notting Hill.  And as Captain Charm-Offensive is a smoker, I spent Thursday evening in true Londoner-style, drinking on the pavement, outside a local pub!

I’m not gonna lie, I came away none the wiser about the situation – as to whether he liked me, and whether, had we met in other circumstances, he would ever have asked me out on a date.  True to his name the Captain was completely charming, and a real gentleman, but he wears far thicker armour than most boys I know.

What I do know, is I had a really fun time – and as I’m always preaching about dating, that’s the most important part.  I had a fun, interesting evening, with a fun, interesting guy.  Yes, I was dating out of my depth in a number of ways, but sometimes you have to scare yourself a bit, and push yourself, in order to have a really fun time.  Sometimes you really do have to do something which scares you!

This week I took a leap of faith and left my reliable, well-paid, banking job, for the uncertain adventure of life as a freelance journalist.  In the same week I gave a talk to 90 singletons at the Guardian 10 Year Anniversary event, and then interviewed two celebrities face-to-face.  They are all situations which on face value scare me.  All situations which make my heart beat a bit faster, and dissolve me to nervous clumsiness in the run-up.

But at the end of the Guardian presentation, I was grinning from ear-to-ear.  And after each successful celebrity interview, there’s been an extra spring in my step.

The same can be said for my daunting first date as a Londoner.  Yes, whizzing through traffic on a motorcycle was scary.  Yes, laying opposite an incredibly hot guy, in the relative privacy of a picnic blanket was intimidating.  Yes, not being able to finish my sentence, or tell him the whole well-rehearsed story each time was off-putting and unsettling.  But do you know what, it all made for a really rather fun, exciting and different date.

And for me, those are three key ingredients to a good date! 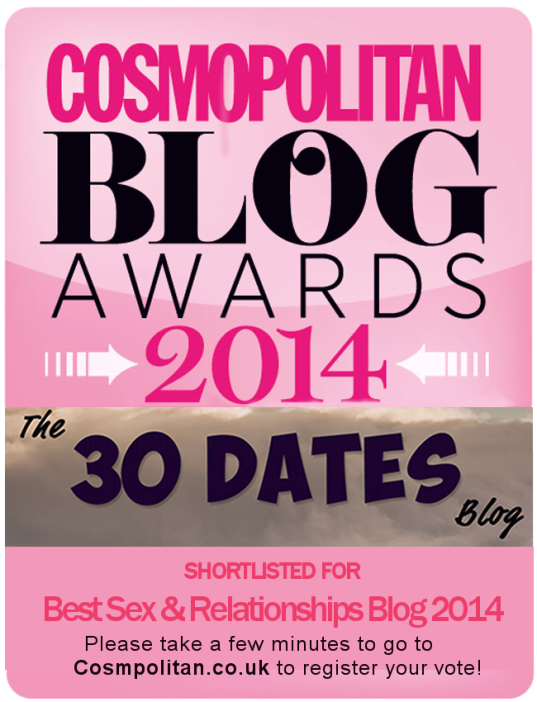